You are here: Home › Case Reports › A Dog’s Life: Molly’s Mange, Eczema and Lack of Confidence 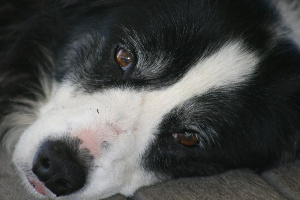 Dogs are often called Man’s Best Friend and just like us they suffer from health problems and emotional distress.

The following story of Molly, a mixed breed dog who was grieving for her lost companion, lacked confidence and suffered from severe eczema, is one such example. Fortunately, homeopathy helped.

When Molly first came to our clinic she was a mess; large areas of bare and scaly skin covered her back and hind-quarters, and her once glossy coat was dry, rough, and tangled with fur-balls. She was constantly scratching, and in spite of frequent baths, smelt so badly she was hard to be near.

Molly’s owners said she had always been a nervous dog, and that they had to be careful of how they spoke to her. On the one occasion when they had raised their voices to her, she had crawled under their veranda and wet herself with fright.

Just recently, Molly had lost her life partner, a male dog whom she had adored. Heartbroken, her behaviour and appearance went into further decline. She hid under the house, avoided her human family and became increasingly submissive, anxious, and snappy. She had even started to whimper in her sleep.

Though Molly ate well, she was losing weight.

Psorinum: What a Difference

Based on these symptoms, I prescribed the homeopathic remedy Psorinum: you can read more about it at the end of this story.

Within a week Molly’s behavior had improved dramatically. She once again wanted the company of her family and even came inside the house when invited – something she would not previously do.

Molly’s confidence was also improving but, most dramatic of all, her missing hair had almost fully regrown within three weeks. She no longer smelt and to everyone’s surprise, she had begun to bark – something that she had never, ever done before!

Molly’s turnaround was shaping into a real success story.

At the beginning of Molly’s treatment, I had taken a brief film clip so that as time progressed I could remind myself of what she had first looked like. Six weeks later, at her next appointment, I filmed her again.

To see the difference in Molly between her two appointments, watch her “before and after” video clip, below. (Note: My photography could have been more professional but I was not expecting to one day be placing Molly on the Internet. The background noise in the first part of the clip is from cicadas – insects that “sing” noisily in the gum trees surrounding the Clinic during summer.)

As you can see, her hair had regrown fully. Her owners also said her confidence was improving.

Based on this response, I advised Molly’s owners to give her another dose of Psorinum if improvements stalled or when any of her old symptoms started to return. I also gave them the good news that they could look forward to reducing her doses and finally stopping treatment altogether once Molly had returned to full health.

For many months, Molly did well with an occasional dose of the remedy but, approximately six months later, her owners realised that it was no longer helping. They brought Molly back to the clinic for an assessment.

At this time she was prescribed Baryta carbonica, a remedy that matched her emerging symptoms of jitteriness with other dogs and an appetite for warm food; its a remedy often used to finish the good work that Psorinum begins.

I’m pleased to report that three weeks later her owners phoned to tell me that Mollie had bounced back to perfect health.

Today, Molly has changed from an itchy, smelly, and unhappy dog to one brimming with confidence and enjoying life with her family. She has a shiny coat and is full of energy. She even greets visitors to the home, something that was unheard of before. But without homeopathy, Molly’s story could have been very different.

Steroid treatments and ‘washes’ – treatments already tried by her despairing owners – only palliated her skin problems; they were not able to correct the underlying imbalance that was the true cause of Molly’s problems, and they were certainly couldn’t help her lack of confidence and anxiety. If used long-term, they likely would have further weakened her health.

In comparison, a homeopathic approach was able to stimulate Molly’s body to safely heal itself. In the process, all her health problems – physical, mental, and emotional – fully resolved rather than just being palliated or suppressed. Molly is now a much happier and healthier dog.

This is the fullness of homeopathy.

Before racing off to buy homeopathics for your pets, or your own eczema, there are some things you should know. Homeopathy has dozens of remedies for the treatment of eczema but each has to be prescribed according to the ‘symptom complex’ of the sufferer. One remedy cannot be used in place of another.

While eczema may appear to be a superficial complaint, it is really a deep-seated chronic problem that responds best to professional management.  An incorrect remedy or a remedy given in overdose can cause a temporary worsening of the eczema. While not toxic, an aggravation of this nature will cause discomfort for you or your pet so please see a qualified homeopath when using homeopathy for eczema.

Homeopathy has numerous remedies for the treatment of eczema. Here are four of the best.

Rhus toxicodendron: Restless dogs who may also suffer from arthritis or stiffness that improves with movement. Redness of affected area, sometimes with swelling or blisters. Severe itching.

Before looking at any treatment for your dog’s eczema, first return the animal to a raw and whole-food diet. A large number of canine eczemas are caused by inappropriate ingredients in commercially prepared dog foods. This one step – giving your pet a more natural diet – can relieve a lot of suffering.

Not sure how to feed your dog a raw and whole-food diet? Click here for a PDF guide.

For more information on caring for your animal companions with homeopathy, subscribe to the Homeopathy Plus! newsletter which carries regular feature articles on veterinary homeopathy.