Homeopathy works brilliantly for human health problems but did you know it works just at well for animals?

The disappearing lipoma of Actium the budgerigar is just one example.  Take a look at his story and photographs – you’ll be amazed at what happened.

Essentially, Actium had a lump. Those who keep birds, especially budgerigars, know they are prone to fatty tumours called lipomas, particularly when fed a seed-only diet. Because the bird’s feathers can hide the tumours in the early stage it can take a while before the owner realises that their pet isn’t just becoming plump: rather, something is actually growing. That’s what happened to Actium. By the time I saw the tumour parting his feathers it was already at an advanced stage.

I dutifully marched Actium off to a vet who had both good and bad news. The good news was that the tumour was not causing him any pain. The bad news was that it would continue to grow and though the vet could operate the chance of Actium surviving was low. He could either bleed to death (budgies have very little blood), or die from the effects of the anaesthetic. On top of this, surgery would cost hundreds of dollars.

The irony of spending $300 or more for the slim chance of saving a $20 budgie was not lost on my family but Actium was a much-loved companion. Having him ‘put to sleep’ just didn’t seem like an option.

So, I decided to see how much homeopathy could help.

On taking his case, Actium’s problem was obvious: a pale, walnut-sized lump protruding from his chest, making it difficult for him to eat or drink from his food bowls. But if I was to treat this pale lump, more information would be needed.

Treating animals with homeopathy is no different to treating humans – the remedy has to be matched to their mental-emotional and physical symptoms. Knowing that more than twenty homeopathic remedies had the potential to treat lipomas like Actium’s I had to narrow the field to find the most helpful one for him – more symptoms were needed.

While I would normally describe Actium as a hyperactive, happy little bird who liked to mimic words and dance to Willy Nelson songs, my family had always said it was a good thing he was only a budgie; that if he were any larger, we would have lost our fingers years ago as he was prone to sudden rages where he’d shriek, scold loudly, and then bite.

These symptoms pointed squarely to the homeopathic remedy Belladonna- a remedy known for treating sudden, violent rages in which the adult, or more commonly a child, can scream and bite with their anger. It was also one of the listed remedies for treating lipomas.

The family gathered to give Actium his first dose, and the results were startling. Overnight, the pale-pink lump discoloured to a purple-pink. Two days later, it started to smell. By five days, it was obviously rotting and shrivelling in size. Actium didn’t seem to mind, though; he was thriving on the extra attention and seemed to enjoy taking his remedy – just a single drop from the end of a dropper for each dose.

It took two weeks before I decided to pronounce the lipoma as ‘dead’. It had shrivelled in size and was now a nuggety brown colour. During this time I’d changed his remedy from Belladonna to a complementary homeopathic remedy called Calcarea carbonica (Calc-c) as indicated by his changing symptoms. Finally, a month later when the Calc-c had run its course, I retook his case and prescribed homeopathic Silicea.

For those familiar with homeopathy, you may know Silica as the ‘homeopathic scalpel’. It is famous for, among other things, expelling foreign bodies from the skin. Deep-seated thorns, splinters, and shards of glass can often pop from the skin with a few doses of Silica.

As the lump was obviously dead but still sitting on Actium’s chest wall I decided that a few doses of this homeopathic scalpel would probably help him to shed it.

Over the following days, the lipoma began to separate from his skin and eventually was only hanging on by a little stalk. Like a plane carrying a bomb, Actium would fly around the house with it dangling under his body. And then, one morning, I woke up to find the lump in the bottom of his cage. Though its size had shrivelled during the previous weeks from a walnut to a large marble, and though its colour was now a mottled brown rather than pale pink, it still had a tiny feather attached to it. Actium’s treatment had been a success.

To show the progression of Actium’s treatment, I’ve gathered some photographs. The first two were taken by my son and are obviously blurred – we had no idea that one day we would be placing them on the internet. The third photograph shows the separated lump with its little feather. The final one shows a groove in the feathers on Actium’s chest – the only reminder of the lipoma that once grew there. As for Actium, he’s now a healthy, happy bird – something that was achieved with zero risk and for far less money than the alternative. My family was very happy. 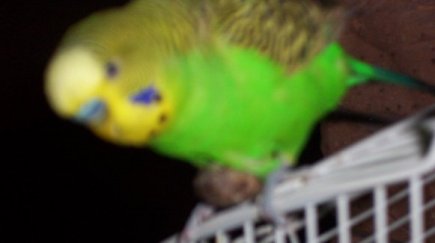 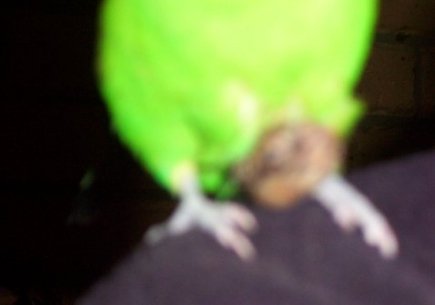 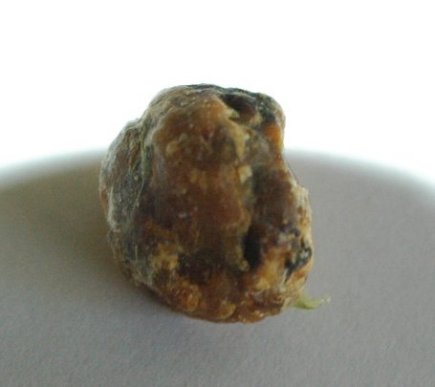 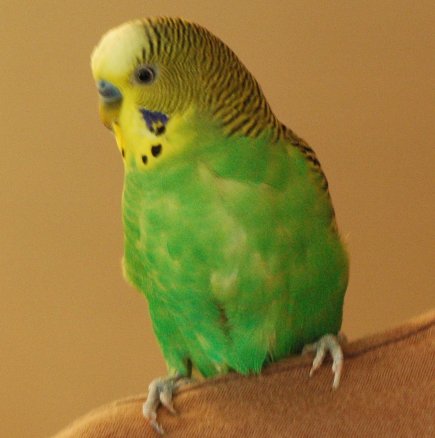 Actium cured!
For more information on how to care homeopathically for your animal companions, subscribe to the Homeopathy Plus! newsletter for regular articles on this topic.

Sandra’s Irritable Bowel and Other Problems

Arsenicum – Is it a Cockroach Deterrent?