You are here: Home › Case Reports › Somi – An Aggressive Child 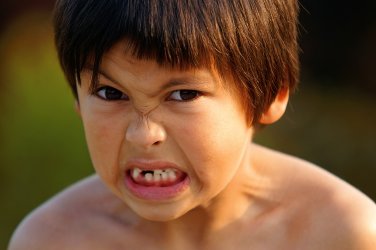 As parents, most of us wish the best for our children and try to instil in them sound morals and acceptable behaviour necessary for life. However, with some children, even the best of parental intentions can be thwarted.

These children quickly acquire labels like, ‘naughty’, ‘hyperactive’, or even “budding psychopath”. Often the finger of blame is pointed at the parents but my experience has shown that the root of these behavourial problems can be very different.

Take Somi, for example. At only seven years of age he was facing expulsion from school. He had just hit another boy in the face, splitting his lip, before pushing him over a bag and onto the concrete. This was not the first time something like this had happened. There had been a series of unprovoked attacks and a number of suspensions. The school had finally had enough and Somi’s mother was told there were no more chances. One more strike and Somi would be out.

Somi’s mother loved her son dearly but she was in despair and exhausted by his behaviour. No amount of reasoning could get him to see how wrong it was. Somi seemed elated and energised by bullying other children and felt no remorse for any pain or injury he caused them. Throughout the consultation, Somi spoke contemptuously to his mother and frequently swore at her, refusing to do as she asked. At home he would often become violent when she tried to discipline him

Somi’s Mum described her son as fearless, hyperactive, impulsive and argumentative. For as long as five years, he had been aggressive, defiant and prone to violence. He would go into rages and even threaten to kill. During these episodes he could become so strong that it would take several people to hold him down. For someone supposedly so tough and fearless, Somi was surprisingly scared of the dark at night and could not go to bed alone. He had suffered from night terrors as a toddler and still had occasional nightmares about wolves and bears. He also hated to be separated from his mother. Even when she dropped him off at school, he would release blood-curdling screams and appear genuinely distressed. At the age of seven, Somi was still a regular bedwetter.

Somi’s mother told me that he became fixated with things that upset him. Like a dog with a bone, he would not let them go. One of his fixations was his appearance. Somi would change his clothes up to five times a day and was very particular about the outfits he wore. He would spend long periods checking the way he looked in front of a mirror and would become abusive if hurried by his mother.

A vegetarian since birth, Somi had been kept on a careful and nutritious diet. Although he craved sweets, chocolate was a real no-no. Too many times his mother had seen him ‘go crazy’ with just a small piece. He would roll and tumble about the floor for days.

Somi had previously been to a nutritionist and therapist, who had carried out some expensive laboratory tests. Somi was diagnosed as having a reduced production of digestive and pancreatic enzymes from a vagus nerve invaded by Toxoplasma and a pancreas invaded by Mycoplasma and Rickettsia organisms. As a result Somi was hypoglycaemic and unable to break down many foods. The tests also showed heavy metal toxicity and a systemic yeast infection with Candida in Somi’s blood. Quite a mouthful for somebody only seven years old!

The nutritionist had advised major changes in Somi’s diet and prescribed numerous supplements and several homeopathics. Somi’s mother had religiously followed this regime for two months and during this time, Somi’s body nutrients and pancreatic hormone levels returned to normal and his heavy metal toxicity disappeared. A followup visit showed there was still some yeast infection present, so Somi was prescribed further supplements and homeopathics.

Good nutrition is always necessary for good health, but Somi’s diet prior to his appointment with the nutritionist was already adequate and he should have been thriving. Somi’s inexplicable nutritional deficiencies and sensitivities pointed to a deeper energistic imbalance that had to be corrected before any real and permanent improvement could occur. Unfortunately this did not happen. Somi was prescribed an inappropriate cocktail of homeopathic medicines at frequent intervals. They could not help his problem and had the very real risk of increasing his state of imbalance. “Homeopathic” treatment like this cheats the consumer and can worsen health. After months of this treatment, with no improvement in his behaviour, Somi’s Mum brought him to see me.

After listening to Mum and observing Somi, it was clear that Somi needed homeopathic Belladonna. I prescribed several diluted doses. Two weeks later, Somi’s Mum called to say that there was a significant improvement in his behaviour. His anger had decreased and a rash had reappeared on his face, which she had not seen since he was a baby. I assured her that “a return of old symptoms” was a positive sign that the imbalance was being addressed and looked forward to further reports.

At the first followup consultation I could see that Somi’s rash was clearing. His hyperactivity and obsessional behaviour had reduced dramatically, by 80%. Somi was no longer wetting the bed so often and his sugar cravings were less severe. Both Mum and I were pleased with his progress and planned to let the medicine continue its action, only redosing if needed.

Over the coming months Somi continued to improve. He became much less argumentative and more cooperative. As his physical aggression reduced he became more willing to please. The bedwetting stopped completely and his food sensitivities virtually disappeared. Somi no longer needed to dose with the Belladonna.

The school was aware of Somi’s homeopathic treatment and also saw a huge improvement in his behaviour. During this period there was just one further physical outburst that occurred at school, and both the school and his mother were amazed at what followed. For the first time, Somi seemed shocked at what he had done and felt sorry for the child he had attacked. He spent the night crying in his bedroom and on his own initiative apologised to the boy the next day – something he had never done before! Instead of being expelled, the school agreed on a week-long suspension and watched his behaviour continue to improve.

Four months down the track Somi was a different boy. He no longer had a problem with explosive rage and violence. A happy relationship had developed with his mother and favourable reports were arriving home from school. Even his obsession with clothing had gone, with Somi happily telling me at his last consultation ‘I don’t even have to look in the mirror anymore.” Instead of being pushed from school to school and labelled a ‘problem child’, Somi was well on the way to enjoying a normal, happy childhood.

Belladonna is just one of the homeopathic remedies for treating sudden rage and violence in children or adults. Those needing Belladonna will often strike, bite, pull hair, spit and curse with their anger. They can be “an angel one moment and a devil the next”. Often there is a love of lemonade. As in Somi’s case, children may fear the dark and wolves (or large dogs), be stubborn and have problems with bed-wetting. They can also be vain. Belladonna can be helpful for conditions as diverse as fever, migraine, sinusitis, arthritis and high blood pressure when symptoms match the overall Belladonna profile.