You are here: Home › Homeopathy in 30 Days Content › Boericke on Staphysagria (Staph.) 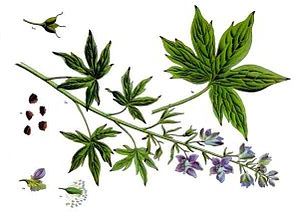 Nervous affections with marked irritability, diseases of the genito-urinary tract and skin, most frequently give symptoms calling for this drug. Acts on teeth and alveolar periosteum. Ill effects of anger and insults. Sexual sins and excesses. Very sensitive. Lacerated tissues. Pain and nervousness after extraction of teeth. Sphincters lacerated or stretched.

Mind.–Impetuous, violent outbursts of passion, hypochondriacal, sad. Very sensitive as to what others say about her. Dwells on sexual matters; prefers solitude. Peevish. Child cries for many things, and refuses them when offered.

Head.–Stupefying headache; passes off with yawning. Brain feels squeezed. Sensation of a ball of lead in forehead. Itching eruption above and behind ears (Oleand).

Throat.–Stitches flying to the ear on swallowing, especially left.

Stomach.–Flabby and weak. Desire for stimulants. Stomach feels relaxed. Craving for tobacco. Canine hunger, even when stomach is full. Nausea after abdominal operations.

Urinary.–Cystocele (locally and internally). Cystitis in lying-in patients. Ineffectual urging to urinate in newly married women. Pressure upon bladder; feels as if it did not empty. Sensation as if a drop of urine were rolling continuously along the channel. Burning in urethra during micturition. Prostatic troubles; frequent urination, burning in urethra when not urinating (Thuja; Sabal; Ferr pic). Urging and pain after urinating. Pain after lithotomy.