You are here: Home › Your Story › Dyshidrosis helped by homeopathy – Betty’s Story

First of all, I should warn you that this is a very long story. I’m going into great detail because I think it may be most helpful to others if I write about my experience and the sequence of events that led to me having success with my dyshidrosis. 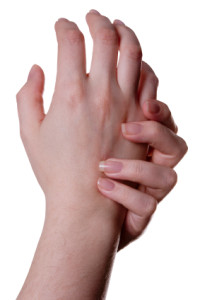 I’m not sure how/what led to my horrible dyshidrosis experience/nightmare. I think it may have been the perfect storm of stress, taking penicillin for a root canal, wearing latex gloves when playing with our dog (to “protect” my already dry skin) which resulted in sweaty hands, and foolishly using “regular” hand and dish soap while staying at someone’s house for two weeks.

I have a history of eczema and skin issues so it didn’t shock me when my right palm became very dry. I’ve even had tiny itchy bumps on my fingers before but like everything else skin-related, I just sighed, ignored it and assumed it would eventually go away.

Over the course of a few weeks the dry and itchy palm became more irritated, and my left palm started to become dry as well. Several layers of skin peeled off and the fluid-filled bumps arrived, and eventually the itchiness and blisters spread to the sides of my fingers.

These eventually morphed into full-on boils (sometimes pus-filled!) on my palms or right where the finger joints are, which made them incredibly painful. They would pop, be really sore for a day or two then dry up, only to be replaced by one or more boils.Sometimes a finger would swell up (so pretty!).

I also had soreness in my left armpit which at the time I didn’t realize can be a bonus symptom of dyshidrosis.

My palms were bright red with sores and looked like I had forgotten to wear gloves while assembling a nuclear weapon. One of the blisters was near the cuticle on one of my fingers, and eventually it took part of my nail off. It was a horrible cycle.

I bought several pairs of cotton gloves from the drugstore and fortunately, it was cold enough so that when I went out (where just pushing a grocery cart was irritating to my hands) I could put winter gloves over the cotton ones instead of wearing just the white ones that made me look like an insane mime.

I avoided washing/wetting my hands whenever possible. I also wore latex gloves over the cotton gloves for strategically performed showers and shampoos.

I tried a lot of things topically, including 2-3 days of cortisone cream which I LOATHE because in my experience it never really clears anything up and only makes for more problems. I also tried jojoba oil, aloe, Cerave lotion, Cerave cream, Egyptian magic (containing olive oil and beeswax), a burn cream from a homeopathic pharmacy, and calendula ointment (with a petroleum base).

In the end, the topical treatment that seemed to work best for me was the calendula ointment and…Vaseline, which I think is because it keeps skin from getting chapped. I’ve usually avoided petroleum-based products but so far this is what seems to work best for me.

I scoured the internet for other peoples’ comments and suggestions and decided to try homeopathy, which has worked for me in the past with other ailments. I STUPIDLY diagnosed myself and took a remedy.

The day after I took the first dose, I noticed a definite change…it was worse, and I broke out in a rash on my wrists and forearms. I went to see a homeopath as soon as possible. I told him everything I’d done, and he said I had actually been on the right track but not quite the correct remedy and in too high a dose.

He prescribed a different one. He suggested I soak my hands in baking soda and water since the alkaline would be good for the acidic quality of the problem. I did it only twice because it burned so much afterward.

I cut down on acidic foods, wine, wheat and sugar because the homeopath said they create inflammation which is not good for the body in general but particularly bad for this.

I must also mention that I stopped drinking coffee (which I love) because a homeopathic remedy will not work if you’re drinking coffee (including decaffeinated). Caffeine is okay; coffee is not (neither is mocha flavoring, which contains coffee oils). One must also avoid mint, rosemary, and menthol. I use fennel instead of mint toothpaste.

I do miss coffee and intend to go back to it once I’m positive the dyshidrosis is gone. However, I think it’s worth examining what I enjoy eating too much of (sugar, white flour and rice) since I can’t imagine there is no correlation between what I take in and how my skin may react or erupt as a result of it.

After about a week I noticed my hands begin to change. I would still get the painful boils but they were…different. Eventually I began to get fewer of them (though when I thought they were gone for good a new one would appear, often where my finger joint was.

What began to happen was that instead of turning into big, awful boils that last for days, the blisters would pop and resolve without the extended painful period and without being replaced by another boil. My skin began to be less bright red and more pinkish, but I still kept them heavily moisturized with Vaseline and wore cotton gloves (putting latex over the cotton ones when doing dishes, etc.).

It’s been seven weeks since I first took the homeopathic remedy, and my hands are SO MUCH BETTER. The best and most dramatic difference is that I no longer get the dreaded blisters so it’s enabled my palms and fingers to actually heal.

My palms are still pinker than normal and delicate. I still wear cotton gloves to keep my hands protected (and the world around me protected from Vaseline). Even now, when I root around in my purse without gloves I might as well stick my hands in a pile of brambles.

I suspect it will be several more weeks before my hands are back to “normal”, and I’ll be very careful about coming into contact with possible irritants.

I should also mention that although I prefer to use “natural” remedies when possible, they can be as ineffective or harmful as allopathic ones. For example, “tamanu” oil, which is known for its natural healing properties, works very well for many people, but when I tried it one night the next day my skin was a lot worse.

If you’re interested in trying homeopathy, you should locate a reputable homeopath, preferably one who has successfully treated someone you know. Of course everyone’s body, symptoms and reactions to remedies is different, so you shouldn’t treat yourself or rely on my experience.

I offer the information as an example of what worked for someone with dyshidrosist, and it didn’t require repeat visits to a dermatologist, oral medication or excessive use of topical steroids. The homeopath wasn’t inexpensive but my homeopathic remedy cost under $10 from my local natural foods store).

If I have more to report in the future, I’ll do so. For now, I wish you the best of luck with your skin issues and encourage you to keep trying to find what works for you.

Things That Happen to Fingers