You are here: Home › Your Story › Baby Taylor’s Homeopathy Story 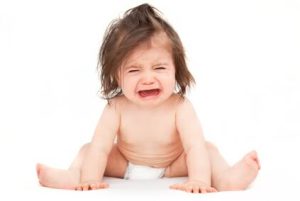 I first saw our homeopath some months ago when I was on the edge from sleep deprivation because of our 10-month-old baby girl – our first.

She had always been a somewhat bad sleeper but had gotten much worse at about 5 months of age. Otherwise, she was a healthy little girl.

Although her night terrors had been sorted with treatment from a previous homeopath, she still had an unbearable sleeping pattern, especially around her terrible times of teething.

She also had a lot of unusual fears: vacuum cleaners, confined spaces like lifts, and a complete terror of all men other than her father – and it was worse if they wore dark clothes.

As for her sleep – or lack of it – she could go to sleep at night easily but would not stay that way. She would wake first at midnight then every hour, on the hour.

This wakefulness escalated as the night continued and each time she was more difficult to resettle. Sooner or later I would feel completely beaten and she would end up in our bed so I could at least get a few hours’ sleep.

Now, I can honestly say that after a few months of homeopathy, the results are nothing short of brilliant.

She seems to have no fear of men – dark clothes or otherwise, she laughs at the vacuum cleaner and chats to strangers when we are in a lift. Her teething still has its issues bit is considerably better. Some of these changes happened within hours or days of the remedy being given.

But the biggest difference is her sleep. She still wakes on average 2-3 times a night and I may need to get up and help her by finding her pacifier or to give her a pat but rarely do I have to pick her up and she will often just settle again by herself – it really is amazing.

This little girl slipped into one of the worst sleeping patterns I have ever seen in an infant. Her mother was bleary-eyed and struggling to stay awake and her father could no longer cope with his lack of sleep and work commitments. Something had to be done.

During the consultation I discovered that, in addition to the concerns mentioned in her mother’s report, Taylor also:

Several remedies were indicated for these diverse symptoms and characteristics.

While one suited the night-time disturbances and acidic bowel motions, another matched her shyness and fear of men and strangers. Still another suited her fascination with babies and her bossy, demanding behaviour with her mother, and another, her difficulty with teething and noise sensitivity. What to do?*

Simple. I prescribed the remedy that seemed to be the closest match knowing that Taylor’s initial response to it would act as a guide for ongoing treatment.

Three days later I received a phone call from Taylor’s Mum. Taylor was calmer and less clingy, had not had a single ‘meltdown’, and best news of all, was much better with her sleeping. This was a promising start so the same remedy was continued.

Over the coming months all of Taylor’s problems either significantly improved or disappeared. Her shifting symptom pattern had required regular changes to a matching remedy but surprisingly, not always to one of those that had seemed so well indicated at the beginning.

Today, I am pleased to report that Taylor’s family is now getting a lot more sleep. Her Mum still brings her in as needed for homoeopathic treatment and she continues to move toward improved health.

*Homoeopathy is a safe system of medicine so it might seem reasonable to give a number of remedies at the same time if it is hard to choose between them but this can be counter-productive, especially in the treatment of chronic problems. It can confuse the symptom picture (and the prescriber), slowing the progress of treatment. For this reason, single remedy prescribing is the best way to go for deep-seated problems. It is then easy to analyse the person’s response to the remedy so that clear decisions can be made on how treatment should progress. If symptoms have become muddied by too many remedies being given at the one time, this is not possible.

Viral Load Reduced in Hepatitis B