You are here: Home › Therapeutics › Hay Fever Help with Homeopathy 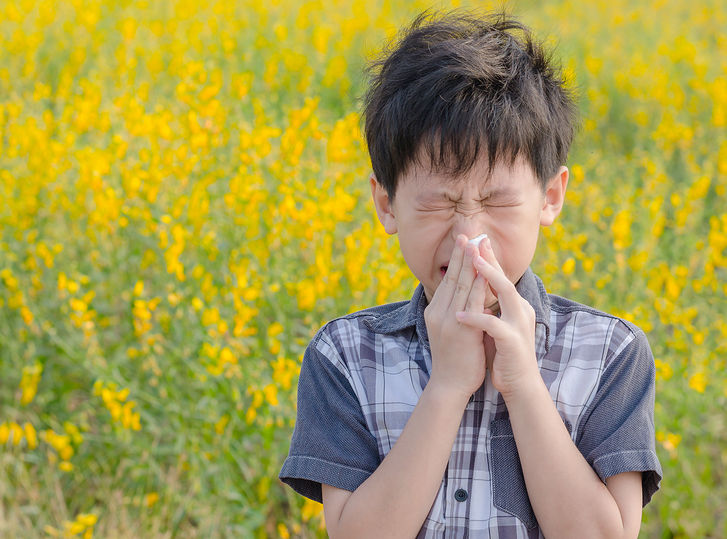 When working well, our immune system protects us from the bacteria, viruses and toxins that enter our bodies. With hay fever though, something goes horribly amiss and it starts to over-react to harmless substances such as pollens, grasses, and animal dander.

This allergic response results in a cluster of symptoms that make life miserable such as sneezing, stuffy or running nose, itching, headaches, asthma, watery eyes, post nasal drip and fogginess.

While hay fever may seem to be about surface symptoms only, it is really a deep-seated complaint. Commonly prescribed sprays and tablets that suppress hay fever symptoms may bring temporary relief but don’t get to the root of the problem. They are also associated with side effects and so are probably the least helpful option for long-term improvement.

In this article we provide simple self-help measures that go a long way to reducing the frequency and intensity of hay fever symptoms, and explore some of the homeopathic and conventional treatment options from the perspective of indications and safety.

Finally, a list of remedies commonly used by homeopaths to treat hayfever, along with when they should be chosen, will help you decide which one may help you.

There are several self help measures at little cost which may help with hay fever. They are:

If we want the best result for the least risk when treating our health problems, we must think carefully about the different types of treatment option available.

Conventional medicine depends on the allopathic effect for most of its treatments. It relieves symptoms by palliating or suppressing them for short periods of time. The drawback is that side effects are common and continual suppression can lead to worsening health.

Homeopathy seeks to stimulate the body’s innate ability to self heal. The goal of treatment is to strengthen rather than weaken this ability so that full healing is more likely. Homeopathy does this through potentised remedies that closely match the symptoms of the person’s disease and are free of toxic side-effects.

Numerous studies indicate homeopathy should be a treatment of choice for allergies. They showed that homeopathy alleviated the symptoms of hay fever and other hypersensitivity disorders and led to improved quality of life without dangerous side-effects. A sampling of these studies have been placed in the Research section of the website.

Treating yourself with homeopathy during an acute phase of hay fever is easy as long as you know which remedy matches your symptoms. Relief with the correct remedy is usually rapid – sometimes within minutes – and all remedies are considered safe for use during pregnancy and with babies through to the elderly when taken according to instructions.

Do be aware that self-treatment does have its limits. While the remedies and potencies in home use kits help to provide symptomatic relief they are unlikely to get deep enough to correct a predisposition to chronic hay fever. A course of treatment by a qualified homeopath is much better suited to this. The bonus is that other health problems should also improve along with your hay fever during this deeper treatment.

Should you find it difficult to sort through your symptoms, ABC Homeopathy has an online remedy finder to make it easier. Or, consider using our Hayfever Complex that combines a number of the more frequently needed remedies – if the one you need is in the mix it will provide relief.

Alternately, an appointment can be made with a homeopath who will assess your symptoms in full and make a constitutional prescription to help you get on top of the problem once and for all.

This remedy, prepared from the red onion, treats the symptom of streaming eyes and nose that is worse in warm and stuffy rooms. (People who need All-c may even crave and feel better for eating onions.) Their nasal discharge burns while tears from the eyes are bland – the opposite to Euphrasia’s symptoms. Sneezing can be intense and frequent and eyes are sensitive to the light.

This is one of the best remedies for hay fever.  Burning or itching in the nose, eyes or throat being a strong indication.  The discharges from both eyes and nose will be burning (but check to make sure that Allium cepa or Euphrasia are not better indicated – Euphrasia has the opposite symptoms). An improvement of the symptoms in the open air, although sensitive to light, is usually an indication for this remedy.

A classic remedy for hay fever where, again, there is lots of sneezing with streaming eyes and nose.  If the water from the eyes burns the cheeks and the discharge from the nose is not too bad, this remedy is needed.  (Allium cepa has the opposite symptoms). The remedy is indicated if the symptoms improve in the open air – obviously away from pollen.  Sensitivity to light may be apparent in both Euphrasia and Allium cepa.

Initially, there is a streaming, bland discharge from both the eyes and nose with lots of sneezing.  Later, there is nasal discharge that is thick and clear like the white of an egg with loss of taste and smell.  This is not one of the main remedies for hay fever but it can bring great relief to the type who gets easily burned, feel generally miserable, uncomfortable, blotchy and irritated in the sun.

This is one of the best remedies for when there is lots of sneezing, streaming from the eyes and nose, and an irritable, nasty mood.  (If they are sweet tempered, it is unlikely to help.) The symptoms are worse in dry air and relieved when the atmosphere is damp.

The main indications for this remedy are a weepy, needy, state of mind, together with discharges that are thick, bland (not acrid) and green or yellow.  Pulsatilla frequently has one side of the nose blocked or congested.

Watery, burning nasal discharge, or a blocked nose, when outside. Frequent sneezing. Blocking of nose on alternate sides. Burning pain in eyes. Symptoms worsened by warmth and becoming warm in bed. Better for being in open air. May be lazy, opinionated, and desire sweets, alcohol, and spicy food.

Irritation or itching in the nose leading to boring, picking, rubbing. May pick at lips and face. Throat, mouth, tongue, and palate may burn, making it difficult to eat or drink despite having a thirst. People who need Arum-t may experience concurrent hoarseness and peeling or chapping of the lips.

Consider this remedy when either no other remedy seems accurate or if other remedies have been tried and haven’t worked.

Consider this remedy when thick, stringy, green or yellowish mucus from the nose or throat is present. There may also be a post-nasal or pain at the root of the nose relieved by hard pressure.

Hay fever with frequent, spasmodic sneezing that exhausts the person. Sneezing from tickling inside the nose, and sneezing that causes the eyes to water. Profuse, watery nasal discharge and red and burning eyelid margins. Symptoms worse in the open air, better in a warm room. Dry mouth but little thirst.

Burning, stinging eyes. Paroxysms of sneezing with mucus discharge from nose.One of the main remedies for people allergic to house dust mite.

Tremendous itching of the upper palate of the mouth causing the person to make “clucking” noises in effort to provide some relief. Itching of the nose and throat, along with a constant desire to swallow saliva to relieve the dryness may also be present.

Conventional medicine treats hay fever with antihistamines, steroids, or desensitisation treatments. For stubborn cases that fail to improve, laser surgery may be recommended to destroy the mucus-forming nasal tissue. Let’s look at each option in more detail.

Anyone can be affected by the side-effects of antihistamines but children and the elderly are more vulnerable. Antihistamines can worsen conditions such as glaucoma, enlarged prostate gland, difficulty in passing urine, or bowel blockage, and their safety during pregnancy hasn’t been established. They also hold increased risks for those with liver or kidney disease.

Some of the most common side-effects include: headache; drowsiness; dizziness; blurred vision; confusion; dry mouth; constipation; and difficulty passing urine. Once the antihistamine effect wears off, hay fever symptoms are usually return.

Steroids (corticosteroids) for hay fever are available as sprays, creams and tablets. Steroids generally produce more problems than antihistamines. They may lead to unpleasant or dangerous side-effects such as high blood pressure, bleeding from the bowels or stomach, reduced healing, poor muscle growth, weight gain, and electrolyte imbalances. Long term use increases the likelihood of these symptoms along with diabetes, glaucoma, and eye damage. In addition, patients may experience mood swings, personality changes, agitation, nervousness, tiredness, lack of energy, and depression.

The homeopathy effect can take place anywhere – even with some approaches used by conventional medicine. Modern allergy treatments that expose people to small amounts of the substance to which they are allergic unknowingly use the homeopathic principle of ‘like treats like’. Homeopaths have used this approach for two centuries but are aware that if even smaller amounts are used, and in potency, the results are faster and better.

Homeopaths also know that while a homeopathic remedy prepared from an allergen (the substance that triggers an allergic response) can bring temporary relief or surface improvement, a deeper-acting remedy that addresses the person’s whole state of ill-health will lead to the hay fever being eradicated permanently and better health overall.

Laser surgery is used to vaporise the mucus membranes of the nose to inhibit the symptoms of hay fever. Care has to be taken to prevent burning of the nasal tissue. Success is variable and re-vaporisation is often needed when symptoms return over time.

Suppressing symptoms for short term relief does not produce the best long term results for hay fever and is associated with side effects and even permanent injury. When safer options are available we would all be wise to explore those first. Homeopathy is one of those options.

Help! I Have PMS!

abort nasal symptoms to prevent many ailments including asthma and Covid-19.The following combo is recommended:
Influenzin 200
Eupat.Perf 30
Gelsemium 30
Alium cepa 30
Ars alb 30
Spongia 6
As a preventive daily once for three days if it is in the air or in the system.
Can be repeated every three months
To treat and effect cure daily twice for 7/10 days.
Follow it up with indicated miasmatic remedy.

Hi,
Thank you for your comments.

Your advice regarding nasal symptoms, asthma and Covid -19 is much appreciated.