You are here: Home › Your Story › Homeopathy: Tinctures or a trick of the mind? 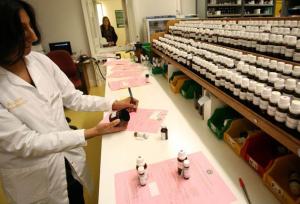 This week, a Commons committee declared that the NHS should stop funding homeopathy, describing its remedies as no better than a placebo. Jeremy Laurance hears what the patients think.

The Royal London Homeopathic Hospital may be under siege but the staff and patients remain relaxed. There has been no run on Gelsemium, the homeopathic remedy of choice for people paralysed by fear, in the pharmacy. Indeed, the only sign of trouble is the poster affixed to a pillar in the third floor waiting area alongside the stall selling Tick Tock redbush tea – the kind Precious Ramotswe drinks in The No 1 Ladies’ Detective Agency. “Save NHS homeopathy”, it says.

Another poster urges supporters to join a lobby of parliament. Long before MPs from the cross party Commons committee on science and technology gave the thumbs down to homeopathy on Monday, people here knew what was coming. The remedies worked no better than a placebo, the committee said, and the NHS should cease funding.

It was a withering verdict but the hospital remains undaunted. There are no placards or demonstrators here. Just the usual crowd of patients – predominantly middle aged and female – that you find in any hospital waiting area.

Supporters of homeopathy – practitioners and patients alike – are used to controversy and another bout of negative publicity, of which there is never a shortage, is not going to change their minds. “I was irate,” says Gillian Arneil, waiting for her appointment. “They don’t understand what this hospital does for people. I come out of my GP’s surgery banging my head and I come out of here feeling 10ft tall. This is the main homeopathic hospital and it is the Royal as well. You can’t do better than that.”

Graham McClarty taps me on the shoulder, anxious to tell me what homeopathy has done for him. A former policeman, he used to be off sick with bronchitis for extended periods at least twice a year. He tried a course of homeopathy, the bronchitis cleared up immediately. Today he has brought his wife here. “I just wanted you to know,” he says.

Linda Tricker, fizzing with enthusiasm and anxiety in equal measure, describes the digestive problems that brought her here which orthodox medicine was unable to solve. “I had more investigations and consultations than hot dinners. My file was becoming fatter and fatter – the doctors said I was neurotic and sent me away with anti-depressants. The NHS did nothing for me,” she said.

For many, this is the place of last resort. She has been coming for two years, referred by her GP, and says the hospital has seen her through the most stressful period of her life. “I know there is a lot of quackery in alternative medicine but for people who have difficult problems these hospitals are a godsend.”

Whether homeopathy has divine origins is for others to judge, but the level of enthusiasm shown by the patients I met during a two-hour visit was untypical of the average NHS district general. As Dr Sarah Eames, director of women’s services, was showing me around the pharmacy, a woman touched her sleeve. “Thank you for what you are doing,” she said, gazing into her eyes. The patients know they are getting special treatment, not available to most. It is exotic, too, with its “tinctures” and “provings” and “water memory”.

The Royal London is the biggest of the four homeopathic hospitals in the country but it has just 20,000 out-patient visits a year, compared with hundreds of thousands in a conventional NHS hospital. There are 20 doctors, and although most are part-time they do not give the impression of being under pressure as in much of the NHS. All the staff, including the nurses and pharmacists, are medically qualified. This may be alternative medicine but it is the Rolls Royce model.

In one of the smart consulting rooms, with a poster outside describing “Marigold therapy for bunions,” Dr Eames, 56, describes how she came to be a leading practitioner of what many of her medical colleagues regard as magic. “I have been a doctor for over 30 years. I worked as a GP before I stumbled across homeopathy like most people here. What we specialise in is people who are not helped by conventional medicine. Their suffering is long term and we can save money on NHS tests and treatment that has not proved particularly helpful.”

Like many alternative practitioners she is sceptical that figures alone can provide a full picture of what is going on. The Commons science committee argued that randomised controlled trials,  medicine’s gold standard, showed homeopathy worked no better than a placebo. “It depends how you jiggle the statistics,” she says. A 1998 Lancet meta-analysis, cited in the committee report, appeared to show homeopathy was effective and then, when re-analsysed, that it wasn’t. “I rest my case.”

Her bottom line, like many orthodox doctors, is that regardless of what the trials may show, she knows what works, and she has seen patients get better. “It may be dismissed as anecdote but when you continue to see people respond it does build up. Homeopathy has been going for 200 years and hundreds of thousands of people have been treated. Do you discount them all?”

Many doctors would answer Yes, you should discount the evidence of your own eyes until it has been substantiated by reliable, scientific trials. Observation is notoriously unreliable in medicine, as in other fields, because people see what they want to see. Doctors, whether alternative practitioners or not, are as vulnerable as the rest of us. She discounts the argument that homeopathy is “scientifically implausible” on the grounds that while we may lack a scientific model to explain it now we may have one in the future. “We can’t explain everything in terms of molecules – what about electronics and ultra molecular physics? To say homeopathy is implausible is rather old fashioned.”

I ask how she can defend spending scarce NHS cash on homeopathic remedies of unproven effect while cancer patients are denied effective drugs because they are too expensive. “I understand the NHS has to look at how it spends its resources. But by treating the patients we see – with half a dozen conditions and a list of investigations and drugs as long as your arm – we probably save the NHS money.”

In the pharmacy, Janvika Shah, pharmacist, is sticking a label on a jar of Calendula-Urtica cream. It contains mother tinctures to soothe eczema and other skin conditions. In front of her, rows of brown bottles with white lids carrying labels such as Aconite, and Pulsatilla, each have a coloured sticker to indicate the degree of dilution. Next to them glass tubes of tiny white inert pills, 120 in each, await the addition of seven drops of tincture, the “active ingredient”. The tube is shaken after additon of the drops and the tincture, in an alcohol and water base, vaporises so it rises through the pills. Patients typically take one or two pills a day, held under the tongue, for five days or until symptoms improve.

“Everyone who works here uses homeopathy as a first line treatment,” says Dr Eames. Janvika Shah nods in assent. “There’s a good place for this”, she says, preparing a dose for another patient. “It is not a substitute, its complementary.”

Some call it snake oil, some believe it is the 21st century’s cure-all. More than 200 years after the birth of Samuel Hahnemann, the system of medicine he founded, homeopathy, is still the focus of scientific controversy.

The origins of the treatment lie in the dissatisfaction that the young Dr Hahnemann, a German physician who practiced in the late 18th century, felt with the orthodox medicine of the time. His distaste for the then favoured treatments “blood-letting, purging and burning and the administration of toxic substances such as arsenic and mercury” was not difficult to understand and it led him to devote his energy to his “beloved chemistry”.

By testing it on himself he discovered that it produced symptoms of fever similar to those produced by the disease itself and he speculated that this could be the real secret of its curative power. He began to test other drugs on himself, his family and friends, such as belladonna, camphor and aconitum to study the symptoms they produced.But it was not until 1796 that he “first communicated to the world by means of public print his new discovery in medicine”.

Today it flourishes as one of the leading branches of complementary medicine, with millions of adherents across the world. Walk into any high street chemist and in the complementary medicine section you will find arnica, nux vomica, pulsatilla and rhus tox on the shelves. The Queen, David Beckham and Geri Halliwell are among those said to swear by them.