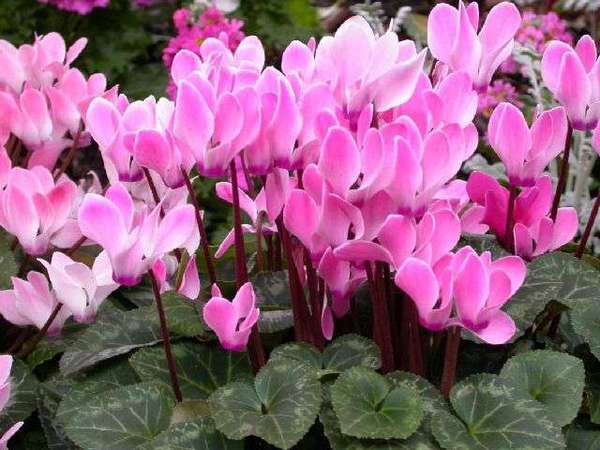 Cyclamen is a low growing perennial flowering plant common to Europe and
the Mediterranean basin. It is easily identified by its oval patterned
leaves and attractive flowers with upswept petals. The homeopathic
remedy, Cyclamen europaeum (Cycl.) is prepared from the plant’s root or
tuber.

Digestive complaints, menstrual difficulties, and emotional disturbances
benefit from homeopathic Cyclamen but only when other symptoms support
its prescription. It is one of the key remedies for indigestion from fat
and pork, and unwarranted feelings of guilt and anxiety of conscience.

When the remedy matches the symptom profile, Cyclamen has the ability to
treat conditions such as: dysmenorrhoea; gastritis; headache and
migraine; menstrual disturbances; strabismus; vaginitis; vertigo and
visual disturbances.

From the old masters:

Violent headache, with flickering before the eyes, or stops and various colors, < in the morning and at the menses.

Mind and Disposition.
Taciturn, depressed, out of humor.
Inclined to internal, undemonstrative grief.
Sudden change of sadness and cheerfulness.
Weakness of the memory.
Dulness of the mind and indisposition to perform any sort of labor.

Generalities.
Pressing, drawing pains, generally in the periosteum or where the skin covers the bones.
Weakness, especially in the evening, with ill-humor and sleepiness ; better when moving about.

Conditions.
Aggravation when at rest and in the evening.
As long as he moves about he feels well, but as soon as he sits down, especially in the evening, he experiences various inconveniences.
Aggravation from eating fat food ; while reposing (when sitting, standing).
Amelioration from moving (walking).

Consciousness almost extinct.
Very active memory, which alternates with weak memory.
Mental labor impossible on account of dullness or stupefaction.
Absorbed in deep thought, seeks solitude, thinks about his future.
Confusion of head ; questions answered incoherently.
Loss of former cheerfulness ; love of solitude ; aversion to work and to open air ; sensation as if room was too small, with reluctance to going into open air ; solitude and weeping give relief. θ Suppression of menses.
Disinclined to work, with weakness.
Taciturn, depressed, out of humor.
Joyful feeling with trembling ; exuberant spirits.
Joyous feeling, alternating with irritability.
Serene humor changes suddenly into seriousness or peevishness.
Great sadness, as if he had committed a bad action or not done his duty.
Great sadness and peevishness ; menses suppressed, or scanty and painful.
Melancholy ; inclined to tears, and silent grief.
Vertigo, with pain in head and nausea ; vomits nearly every day, and often all the food taken, with slime and bile ; greatly reduced, can scarcely walk across floor ; pains in head continuous, but very much worse at times ; < in right temple ; but extend all over head ; mind so affected as to make her indifferent to what transpired about her, and rendered her incompetent to describe her own case ; finally consciousness almost extinct ; questions answered incoherently ; feces and urine pass involuntarily and unconsciously. θ Mental derangement at climacteric period.
On awaking, weariness, clammy mouth and irritable mood.
Ill humor ; disposition to weep ; fear of death, or an illusion of being deserted or persecuted by every one.
Anxiety, with nausea, at night.
Ill humor, after vomiting.
Ill humored, morose mood ; could easily take offense at every trifle.
Obstinate, irritable, fault-finding disposition.
Solitude and weeping give relief.
Ailments from inward grief and terrors of conscience.

Sensation of fulness in internal parts ; sore and bruised pain in external parts ; as if room was too small ; as if brain were moving within cranium, or as it does when riding in a wagon with closed eyes ; as if brain was in motion when leaning against something ; as if brain was enveloped in a cloth, which would deprive him of his senses ; as though fog were before sight and as though eyes were about to close ; as if brain wobbled about while walking ; as if looking through dark blue glass, like mist before eyes ; eyelids as if swollen ; dullness of hearing, as if cotton was in ear or something lying before ear ; as of an induration on upper lip ; qualmishness as after eating too much fat ; as if he had eaten too much ; crawling as of something alive in bowels ; as if a spot was suppurating ; as if room was too small ; as if there was not strength enough to breathe ; as of something alive running in heart ; as if air streamed from nipples ; as if she must let fall that which is in hands ; as if sprained in foot ; limbs feel as if their mobility were impaired.
Pain : in head, with nausea ; in forehead ; one-sided ; left temple ; in bowels ; in fauces ; in small of back ; in bottom of foot.
Indescribable pain : in scrobiculum cordis.
Violent pain : in forehead, temple and vertex.
Tearing : externally in head ; in teeth ; in abdomen ; over scapulæ ; elbow ; in wrist-joint.
Piercing : in upper abdomen.
Stitches : in temples ; in eyes ; in eyeballs ; in inguinal canal ; in chest ; about apex of heart ; in right side ; in mamma ; penetrating, deep and dull in kidney.
Stitching pains : in forehead ; in temples ; in vertex ; in teeth ; on tongue ; in stomach ; in region of liver ; in abdomen ; in umbilical region ; in urethra.
Darting pain : in forehead ; in temples ; in vertex.
Stinging pain : in forehead and temples.
Pricking : at end of urethra ; between fingers.
Sticking : in scalp.
Gnawing pain : in bowels ; in abdomen, thence all over body.
Boring pains : in temples ; in teeth.
Pinching : in abdomen.
Cramp-like pains : in abdomen ; in thumb ; in index-finger ; on thigh.
Twinges : up back.
Labor-like pains : in abdomen ; commencing in small of back and running down each side of abdomen to pubes.
Drawing pain : in right internal ear ; in and about anus and perineum ; in left side of neck ; in ulna ; in wrist ; in left gluteus maximus ; in flexors of legs ; muscles ; in bones ; in periosteum.
Rheumatic pains : in head and ears ; in left side of neck ; drawing in left gluteus maximus.
Aching pains : in stomach, extending through to back.
Formicating : on scalp.
Throbbing : in head.
Bruised pain : above elbow-joint.

Your Your Remedy – Oleander (Olnd.)