You are here: Home › Case Reports › Lack of Confidence and Learning Difficulties 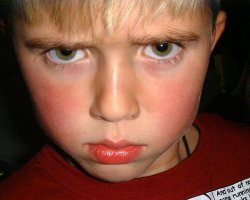 Mitchell was a nine year old boy who hated school. His concentration was poor, and he had difficulty writing. Mitchell would often write his alphabet letters back the front, (using “b” instead of “d”, and so on). He also had trouble remembering the sounds for each letter. He was still in a standard class but was struggling to keep up with his school mates.

Mitchell was also constantly tired. At school, his teacher noted that he would have to lie across his desk rather than sit upright. He could only complete half a game of football and after school he would collapse on a lounge before falling asleep.

Obviously, Mitchell’s parents were concerned. They had taken him to their family doctor but standard tests had failed to reveal a problem. The GP suggested that Mitchell might have dyslexia, an opinion the school supported. Mitchell’s parents had also taken him to a chiropractor, a behavioural optometrist, and an occupational therapist. Slow gains had been made but it was an expensive process.

Mitchell was embarrassed by his difficulties. He hated to fail in front of others and worried that people thought he was “stupid” or “hopeless”. Sometimes he would cry from shame and embarrassment. It seems he had always suffered from low confidence and anxiety.

When frustrated Mitchell could lash out in anger, something his mother said had happened since he was a toddler. He complained of “no friends”at school even though his teacher said he was popular and usually with groups of children.  Unpleasant dreams and nightmares in which he moaned and mumbled disturbed his sleep. Occasionally he would shout in his sleep.

Interestingly, Mitch’s mother said that in spite of these problems, Mitch pretended to be fearless and adventurous. He won the approval of other children by boasting, bragging and acting the clown in in front of them.

During the consultation I asked Mitch who his favourite television character was and he told me Darth Vader from the Star War movies because he didn’t listen to other people, fought a lot, and did what he wanted.

Other symptoms Mitchell experienced included aching pains in his legs at night, bed-wetting which made sleepovers with friends impossible, and the biting of finger and toenails – not just nibbled but down to the quick so they bled. I also discovered that he’d had reflux and eczema as a baby, had been allergic to cow and soy milk, and as an infant, suffered from projectile vomiting.

Mitchell was prescribed a homeopathic remedy called Lycopodium. Lycopodium treats a broad range of physical and mental/emotional symptoms, as long as the characteristic Lycopodium indicators are present.

Its gastrointestinal use has already been looked at in the “Bloated Belly” case on this website. Perhaps Mitchell’s babyhood episodes of reflux and vomiting reflected his need for this remedy even at this early age? Along with digestive complaints, Lycopodium can also treat states of dyslexia, and under-confidence disguised by bravado.

On his first followup appointment, Mitchell’s mother had good news to report. Though Mitchell had wet the bed the day after starting the remedy, he had not done so since. His teachers reported that his behaviour in class had improved; he was paying attention and there had been no episodes of tears or anger.

Mitchell also seemed less tired. He played for the full length of school breaks and although still tired on arriving home, did not need to sleep until bedtime.

Mitchell’s condition and energy levels continued to improve over the following months of treatment. His bed-wetting stopped along with the nail biting, and the nightly leg pains disappeared. Mitch’s “sleep shouting” also ceased.

On his visits to the clinic over this period, I saw him change from a boy full of bravado and suppressed anger, to one who was happy and calm. His mother said he had become more confident and no longer needed to boast or act the fool to attract friends. His teachers reported that he had made a huge improvement with writing and spelling and that problems arising from his apparent dyslexia were minimal.

I now see Mitch only occasionally as small problems arise. He continues to manage his schoolwork well and has an improved level of confidence. He no longer complains of not having friends. As a result, school has become a much more pleasant place for him.

Lycopodium is a homeopathic remedy that treats a wide variety of acute and chronic complaints. On the physical level it mainly deals with symptoms arising from complaints of the gastrointestinal system (including the liver) such as gall-stones, cirrhosis, Crohn’s disease, hepatitis, irritable bowel syndrome, gastric and duodenal ulcers, but only when the characteristic symptoms match those of Lycopodium.

It also treats types of symptoms of arthritis, asthma, chronic fatigue syndrome, dyslexia, eczema, ovarian cysts and other conditions, again, as long as the characteristic symptoms fall within the Lycopodium sphere of action.

On the mental/emotional level, those needing Lycopodium experience lack of confidence and feel inferior to strong personalities though they may muster a false bravado and pretend to be extroverted or assertive. Bragging or boasting to present themselves better than they feel is a trait seen in both children and adults.

Children in a “Lycopodium state” may become angry, bossy, and rude with a parent who lacks firmness but they never display this behavior to adults whom they don’t know or who set firm boundaries.