You are here: Home › Research › Tadpole Research and Remedies

Tadpoles might be small but they’re a homeopath’s best friend.

Not only do they show skeptical scientists that homeopathy really does work, they also provide valuable information on how to keep our remedies safe.

Researchers in two different countries recently tested homeopathically prepared thyroxine (a hormone that influences body metabolism and energy) on tadpoles that were being artificially stimulated by chemical thyroxine.

These experiments were repeated six times with similar results over two countries.

Those who have experienced the effects of homeopathic remedies will not be surprised by this result.

In spite of homeopathic remedies appearing to be nothing more than water, alcohol and sugar molecules when viewed under a microscope, their energetic nature can have health-changing effects when prescribed according to the ‘like treats like’ action of homeopathy.

But the interesting part for those of us who use homeopathy is that the scientists also decided to check the effect of different electromagnetic fields on the remedies.

For centuries it has been known that coffee, mint and camphor can sometimes antidote homeopathic remedies in sensitive people. Polluting electromagnetic radiation, however, is a relatively new phenomenon and we are still unsure of its full effects.

So, our tadpole researchers looked to see if the potentised thryoxine, when exposed to radiation from mobile (cell) phones, airport X-rays, red light barcode scanners, and microwave ovens, still had an effect on the tadpoles. 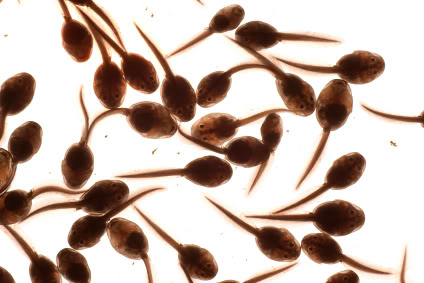 The results? Apparently it’s safe for your remedies be x-rayed at the airport, and scanned by red-light barcode scanners: the potentised thyroxine still worked after being exposed to them.

However, the radiation from a mobile phone at a distance of 25cm destroyed the energetic nature of the potentised throxine – it no longer slowed the tadpoles’ rate of growth.

This information is obviously important for those of us who would like to carry remedies in our bags with a mobile phone – those remedies can be damaged.

Early model microwave ovens with their high leakage rates also cancelled out any effects from the remedy. Unfortunately, the study did not look at the effects of more modern ovens.

So, we can all be grateful to those little tadpoles.

While we are not sure why they had to be stimulated with chemical thyroxine to prove that potentised thryoxine could ‘unstimulate’ them, they have clearly provided us with other valuable information such as- don’t, under any circumstance, warm your remedy in the microwave or carry them beside your mobile phone.

[…] Read more about how tadpoles indicated whether an irradiated remedy works or not – https://homeopathyplus.com/tadpole-research/ […]