You are here: Home › Education › Three Scales of Potency – the Numbers Count 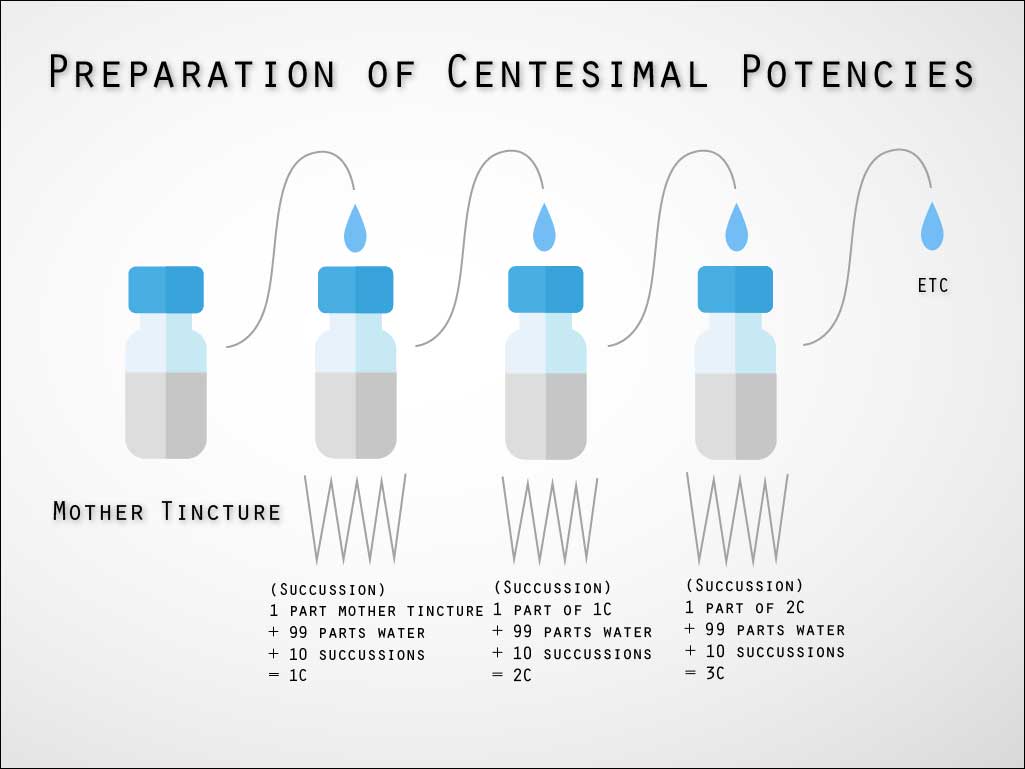 The first scale that Hahnemann developed during the early years of Homeopathy is the centesimal scale. As its name would suggest, it has a 1:100 dilution ratio and it is prepared in the following manner:

All homeopathic remedies have numbers and/or letters that follow their names to indicate the potency of each remedy. The letter and number in Sepia 6C,a remedy prepared from the ink of the cuttlefish, tells us that it has been through six stages of dilution and succussion according to the centesimal scale. A potency of 200C would indicate that it had been through 200 stages while the Roman numeral, “M”, would indicate it had been diluted and succussed 1000 times.

Centesimal remedies are versatile. Practitioners may prescribe them as pilules, tablets or liquids in high or low potencies for the treatment of both acute and chronic disease. They can also be found in lower potencies in retail stores for self-treatment of simple acute problems.If doses are repeated unnecessarily, centesimal potencies may produce proving symptoms.

The decimal scale was the second potency scale to be produced in the development of Homeopathy. It has a dilution factor of 1:10 meaning that one part of the mother tincture or potency is diluted in 9 parts of a water alcohol mixture. Like the centesimal scale, the decimal scale still has 10 succussions between each dilution phase. Once again, the remedy’s name is followed by a number to show how many stages of dilution and succussion it has been through and the Roman numeral “X”to indicate its 1:10 dilution ratio. A 3X potency, for example, indicates three stages of dilution and succussion according to the decimal scale while a 12X indicates that the process has occurred 12 times.

Decimal potencies are easy to use and can be dispensed as pilules, tablets or liquids. Being “low potency” remedies, they can be repeated frequently with little risk of producing proving symptoms. For this reason they are commonly sold by retail outlets for self-treatment of simple acute problems. The Schuessler Tissue Salts are one such example. They are less commonly prescribed by homeopathic practitioners as they have limited use in the treatment of deep-seated chronic conditions.

These potencies are the third and final scale developed just prior to the death of Hahnemann. They are usually known by the simpler names of fifty-millesimal, LM or Q potencies. The process by which fifty-millesimal potencies are prepared is different and more complex than that used for the centesimal and decimal potencies but fundamentally the initial dilution ratio is 1:50,000 with each subsequent stage of dilution being followed by 100 succussions. The remedy’s name is followed by either the letters Q, LM
or the symbols, 0/(number) to indicate it has been prepared in a fifty millesimal dilution scale. As with the centesimal and decimal scales, the accompanying number on the remedy indicates how many stages of dilution and succussion have occurred. For example, a Q6, LM6, or 0/6 remedy will have passed through six stages of potentisation while a Q30, LM30 or 0/30 will have been potentised thirty times.

The fifty-millesimal scale is deep acting and flexible. Unlike other potency scales, fifty-millesimal remedies should not be dispensed as tablets or pilules but only as liquids. Liquid dosing allows the homeopathic practitioner to adjust the degree of dilution and the number of succussions before each dose to suit the individual sensitivity of the recipient. For this reason, remedies from this scale require a greater degree of knowledge to prescribe appropriately and should be reserved for practitioner use only. They are rarely available from retail outlets for self-treatment. As with the remedies from the centesimal scale, proving symptoms may occur if fifty-millesimal remedies are repeated unnecessarily.

Today, some pharmacies still prepare remedies by hand succussion while others mimic the process by machine. When the starting material the remedy is insoluble, as in the case of a metal, it will first undergo a series of grindings with lactose until it can be dissolved for the dilution part of the potentisation process.

Each remedy is prepared in the three different potency scales so the practitioner can prescribe from the one that best suits the circumstances. By the time the homeopathic remedy has been potentised to the stage of 12C or 24X it is impossible to detect any molecular trace of the original substance within it. It has become a”sub-molecular” medicine free of chemical side effects. The surprising fact is that homeopathic remedies are often potentised thousands of times higher than these “low potency” levels, yet when prescribed according to the Law of Similars, still retain their ability to trigger healing responses in the unwell. As a general rule, higher potency remedies act more deeply and trigger longer lasting reactions than their low potency counterparts.

Q: What do Numbers and Letters After Remedy Names Mean?