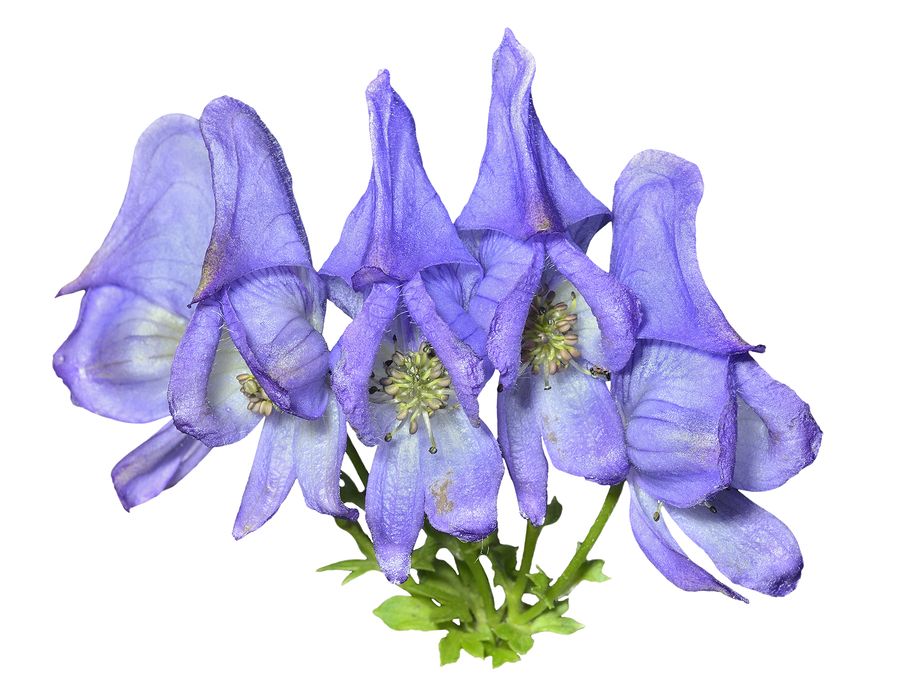 The Aconite plant is highly toxic but safe when prepared in homeopathic potencies. It suits intense symptoms with a rapid onset, especially symptoms that commence at night after the person has been chilled or exposed to dry cold wind earlier that day. Those needing Aconite tend to be restless, fearful, and oversensitive to pain. When symptoms match, it’s an important homeopathic remedy for croup, ear infections, high fevers, flu, shock, fright, or chronic complaints that began after shock or fright. Aconite is best given in the first 24 hours of symptoms. It is less helpful following that time.

It is far more important to ‘get the remedy right than the potency right’ but the following assists in potency selection: Guidelines on which potency to use

Fear: of death; of crowds; of going out. Anything, always fearful.

Pains insuppressable < at night, especially in the evening; neuralgic.

Face very red and flushed, but turns pale on rising up.

Modalities: < in the evening (chest symptoms and pains); lying on left side; in warm room or warm covering.

> uncovering; kicks the clothes off.

We will now take up what I call the trio of restless remedies; viz: Aconite, Arsenicum and Rhus toxicodendron.

All are equally restless, yet all are so very different that there is no difficulty in choosing between them.

The Aconite restlessness is oftenest found in a high grade of synochal or inflammatory fevers. There is no better picture in a few words of the Aconite fever than is given by Hering -“Heat, with thirst; hard, full and frequent pulse, anxious impatience, inappeasable, beside himself, tossing about with agony.”

The custom of alternating Aconite and Belladonna in inflammatory affections, which so widely prevails is a senseless one. Both remedies cannot be indicated at a time, and if a good effect follows their administration you may be sure that the indicated one cured in spite of the action of the other, which only hindered; or that the patient recovered without help from either. There are many cases of this kind where the doctor is congratulating himself on a cure which was only a recovery, for which he deserves no credit at all.

Let us look for a moment at some of the diagnostic differences of these two remedies.

Both have great heat of the skin, but Aconite has characteristically dry, hot skin and no sweat; Belladonna has even greater surface heat, but sweats on covered parts.

Aconite tosses about in agony with great fear of death; Belladonna often has semi-stupor and jerks and twitches in sleep.

Aconite has great distress in heart and chest; Belladonna everything seems to centre in the head.

Thus we might continue to give points of difference. No man who understands the homoeopathic art of healing will ever alternate these two remedies.

Aconite is also a great pain remedy. If we were to name the three leading remedies in this respect it would be Aconite, Chamomilla and Coffea.

The Aconite pains are always attended by the extreme restlessness, anxiety and fearfulness of this remedy. The patient tosses about in agony, “cannot bear the pain, nor bear to be touched, nor to be uncovered.”

Well, you say, all remedies have pain. Not all, and not many so intense pain. Opium and Stramonium have painlessness oftener than pain.

The Aconite pains are intolerable and generally worse in the evening or at night. Then we have often alternating with or sometimes even in conjunction with the pains numbness, tingling, or formication.

In this it resembles Rhus tox., but with Aconite the pains predominate, while with Rhus tox. the numbness, with dull aching and soreness, leads.

The pains of Aconite are tearing, cutting pains, which drive the patient to desperation.

Right here we may as well speak of the leading characteristic of this remedy, for it is almost always present when Aconite is clearly indicated. Just one word expressed it: Fear –fear of death especially, but fear to cross the street, fear to go into society, fear something is going to happen, ever present, undefinable, unreasonable fear. No remedy has it in such a degree as this one.

It is the fear as much as the pain that makes the patient so full of that agonized restlessness.

The Arsenic restlessness goes with extreme prostration and reduced vitality. Rhus tox., on account of the aching pains, which make him want to move for the temporary relief he gets from the movement. Arsenic wants to move from place to place, but is not relieved. Neither Aconite nor Arsenic get such relief from movement, nor does Arsenic fear like Aconite, or at least in any such degree.

Aconite, as a fever remedy, has been greatly abused. Even the old school, astonished at the results of homoeopathic treatment, so superior to their so-called anti-phlogistic treatment, and finding Aconite so highly recommended and frequently used in inflammatory affections, concluded in accordance with their usual way of reasoning that Aconite could be squeezed into their pathological livery and made to do service in all kinds of fever simply because it was fever. But they soon found that however useful it might be in some cases of inflammatory fever, it was of no use in typhoids.

Thus was generalization from a pathological standpoint again doomed to disappointment, as it always must be.

Now many so-called homoeopaths have fallen into similar error by concluding that because Aconite did quickly cure in some cases having a high grade of fever, that therefore it was always the remedy with which to treat cases having high fever.

They even fell into the routine habit of prescribing this remedy for the first stage of all inflammatory affections, and follow it with other remedies more appropriate to the whole case further on. If Aconite were the only remedy having inflammatory fever, perhaps we could do no better than to zig-zag the case to a cure this way.

Dunham writes: “Aconite is never to be given first to subdue the fever and then some other remedy ‘to meet the case,’ never to be alternated with other drugs for the purpose, as is often alleged, of ‘controlling the fever.’

If the fever be such as to require Aconite, no other drug is needed. If other drugs seem indicated one should be sought which meets the fever as well, for many drugs besides Aconite produce fever, each after its kind.” True words, and as one reads them who has proved their truthfulness and remembers they great author, he feels like exclaiming, “Being dead, yet speaketh.”

Aconite has two very important modalities, viz., fright and dry cold air. We have already noticed the value of the fear of Aconite as a symptom, connected with acute inflammatory ailments. It is no less a remedy for ailments brought on by fright, either immediate or remote.

The patient has received a fright in the dark and is always afraid in the dark afterwards. From fright vertigo comes on, or fainting; trembling; threatened abortion, or suppressed menstruation, Jaundice may be induced by it, and become chronic. There are other remedies for fright, prominent among which are Opium, Ignatia, Veratrum album, etc.

I live in a locality where croup abounds and have had abundant opportunity to verify this. Pleurisy, pneumonia and rheumatism also come under this head, and they are, as would be expected, almost invariably accompanied by the high fever, anguish, restlessness and fear so characteristic of this remedy.

Any local congestion or inflammation coming from such exposure also comes under the same rule, always providing the other symptoms corresponds

Such things are well to remember, for one positive indication is worth two or three vague ones.