You are here: Home › Agrohomeopathy › Arsenicum – Is it a Cockroach Deterrent? 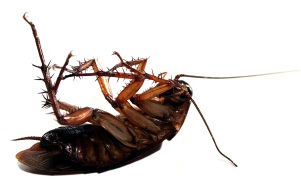 Cockroaches! No one likes them, and everyone wants to get rid of them. Maybe homeopathy can help?

It has recently come to light that a remedy called Arsenicum album may act as a deterrent to cockroaches.

What do Cockroaches do?

Before looking at the remedy, let’s first find out a little more about cockroaches.

They don’t have a good reputation.

They feed in the dark, scuttle frantically in light and infest homes in the space of a summer.

They thrive in warm, humid conditions and prefer to live in food preparation areas so they can feed off crumbs and spills.

Cockroaches are also thought of as being dirty and disease carrying but is this true? Not according to researchers; it would appear that cockroaches are surprisingly clean. They constantly, almost obsessively ,groom themselves and carry very little in the way of decaying food debris or bacteria.

Anxious and Obsessive Arsenicum for Roaches?

It was this fastidiousness that led our agrohomeopath, Kaviraj, to wonder if Arsenicum album would be a useful deterrent for cockroaches after he moved into a house infested with them.

Arsenicum album (often abbreviated to Ars.) is a remedy for those who are overly fussy and tidy – constantly cleaning and sorting things. These behaviours were part of the symptoms produced by Arsenicum during its proving.

Those who need Arsenicum also feel vulnerable and defenceless, especially concerning death and disease. They are chilly, preferring the warmth, and light sensitivity may also be a problem.

Homeopathy works according the Law of Similars (like treats like). While there were several hundred mental-emotional and physical symptoms produced by Arsenicum during its homeopathic trials, it is easy to see from the common ones just mentioned that some similarity exists between the behaviour of the cockroach and someone in an ‘Arsenicum state.’

This similarity is exactly what led Kaviraj to test Arsenicum on his roach infestation – and, according to him, with great results.

Since then we have asked several other people to test the effects of Arsenicum on cockroaches and the feedback has been positive. It really does seem to act as a deterrent.

How to Use the Remedy

Unlike some commercial products, Arsenicum album has no toxic ingredients to harm you, your plants or pets, wildlife or the environment. It won’t irritate if spilt on the skin or poison if accidentally swallowed by a child. It can be safely used in all areas of the house, even on kitchen benches.

Add one pill of Arsenicum album 6C to a spray bottle of 200 ml of water, shake vigorously, and then spray a light mist where cockroaches collect or run.

If needed, a small amount of natural soap (little or no fragrance) can be added to the liquid to act as a wetting agent.

The remedy may also be sprayed onto pieces of bread or cottonwool balls which can then be placed where cockroaches gather.

Kaviraj reports that cockroaches have been seen to avoid treated areas for up to 6 weeks.

Store pills and liquid away from light, moisture, and high temperatures (normal household temperatures are fine).

Close range mobile phone and microwave oven emissions have been shown to affect homeopathic remedies. A

void handling pills unnecessarily – tip one pill from the vial into the cap and then into the spray bottle.

Plants and Bugs Respond to Homeopathy

Homeopathy has been used with people and animals for over 200 years, but its use on plants and insects is still in its infancy.

You might like to join the movement in this area by learning about the symptoms of common homeopathic remedies and experimenting with how they correspond to the pests and diseases of the plant kingdom.

In the meantime, if you have a cockroach infestation and want to avoid dangerous chemicals and sprays, why not try Arsenicum? We would love to hear your results.

What is a Complex?