You are here: Home › Education › Remedies For Disasters (Part 2) 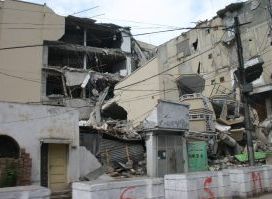 Disaster has struck. Panic and shock are now subsiding. The immediate threat is over.

Those caught in the disaster are literally starting to pick up the pieces of their lives and possessions.

Over our three “First Response” articles we will look at remedies traditionally used in homeopathy to reduce the impact of physical injuries, soften emotional trauma, and lessen the risk of epidemic disease.

We also show you how to compile an emergency homeopathy kit, teach you how to use it and explain how its remedies can be ‘stretched’ to not only help you but others, also.

Moving on to the Next Stage

Once the immediate threat is over, anger, accusations, grief and ongoing fear grip many and raw emotions may bubble to the surface.

Perhaps the most striking thing that outsiders witness, though, is the compassion and support people give to each in the middle of what seems an insurmountable tragedy.

Physical injuries that were not seen as severe at the height of the disaster now need attention and the spread of disease has to be prevented.

Even here, homoeopathy, with its easy production and distribution of remedies should have a key role to play with problems as diverse as gangrene, sunstroke, boils and abscesses.

The following is a summary of  remedies and their traditional indications for the symptoms and complaints seen in the second stage of a disaster.

Arsenicum album (Ars.): Anxious and afraid to be alone. Fear of death or disease. Restlessness leading to exhaustion. Controlling behaviour of others and circumstances. Anxiety worse after midnight.

Stramonium (Stram.): Symptoms usually develop after a frightful experience. Violence towards others from fear of being attacked or hurt. May hit, scratch, kick or bite (children especially). Fear of the dark. Feel much better in company and light.

Comments: If shock, panic or hysteria are still present, refer back to Part 1 for helpful remedies.

Ignatia amara (Ign.): Main remedy for acute grief. Hysterical and changeable behaviour. Angry outbursts and recriminations. Crying when alone rather than in public. Convulsive sobbing. Brooding and sighing. Sensation of lump in the throat. Refusal to eat.

Chamomilla (Cham.): Anger with contrariness. Discontented and dissatisfied no matter what is done – can’t be pleased. Hypersensitive and intolerant of pain, even from minor injuries.

Nux vomica (Nux): Angry, irritable, driven and impatient. Irritable when interrupted or obliged to answer. Intolerant of others especially if they are perceived as being too slow or doing inappropriate things. Overindulgence in stimulants or alcohol.

Many of the first aid and emergency remedies suggested in Part 1 may still be useful during this ‘mopping up’ stage. For example:

Bryonia alba (Bry.): Pain that is worse for the slightest movement. Better for firm strapping, pressure, or lying on the affected part. Useful for fractures, especially fractured ribs.

Hypericum perforatum (Hyper.): Damaged nerves with shooting pains that travel up the limbs, along nerve tracts.

Rhus toxicodendron (Rhus-t.): Pain and stiffness that is worse after rest and better for ongoing movement.

See Gunpowder as a preventative for infection in Part 1 of this article. Additional remedies include:

Arsenicum album (Ars.): Burning pain that is better for warmth. The person is anxious, restless, chilly and thirsty for small sips.

In many disaster situations, animals and snakes are displaced just as much as humans. Once out of their natural habitat, bites and stings are more likely. When this happens, the following remedies should be considered.

Apis mellifica (Apis.): The site of the sting will be puffy. Swelling will be warm and white or rosy pink in colour. Prickling, stinging pains that are improved by cold applications.

Lachesis muta (Lach.): Skin around bite or sting will be hot and look dark red or blue–purple. Useful remedy for tarantula bites.

Working in extreme temperatures or facing sun exposure after the destruction of shelter can leave both victims and helpers at risk of sunburn or sun and heat stroke.

The following remedies can be considered for the pain of simple sunburn plus the fever, vomiting, weakness, cramping, diarrhoea and delirium of sun or heat stroke.

Belladonna (Bell): Hot, red face. Throbbing headache that is worse from light, noise, lying down, or being jarred. Eyes red and bloodshot all glassy in appearance.

Cantharis (Canth.): One of the main remedies for painful and blistering sunburn. Smarting, burning pain relieved by cold applications. Restless and thirsty.

Glonoinum (Glon): Throbbing in head and body. Dark spots before the eyes. Clenching of jaws. Deathly feeling in the stomach.

Natrum carbonicum (Nat-c.): For the chronic effects of sunstroke. Weakness on exertion.

Urtica urens (Urt-u.): Simple sunburn with stinging, burning or itching pain. Better for lying down. Worse for touch and after sleep.

It’s not just those involved in the disaster who are affected. Those who rush to help may work themselves to the point of collapse. See Part 1 for details on remedies such as China officinalis, Carbo vegetabilis and Laurocerasus for exhaustion arising from physical injury or disease.

Additional remedies to consider are:

Arsenicum album (Ars.): Restlessness leading to exhaustion. Anxious and afraid to be alone. Fear of death or disease. Controlling behaviour of others and circumstances.

Calcarea carbonica (Calc.): Weakness from exertion. Sweats on the least exertion and during sleep. Confused and under-confident. Can’t bear to see or hear of cruelties or horrible things.

Cocculus indicus (Cocc.): Symptoms such as numbness, twitching, dizziness, confusion and exhaustion especially following loss of sleep from caring for others.

Phosphoric acid (Ph-ac.): Indifferent, apathetic or physically weak from grief or loss of body fluids. Slow to answer and unable to think of words. Silent suffering – want to be alone. Lack of energy. Exhausted.

Damaged infrastructure, polluted water, lack of sanitation, and decaying matter all encourage the spread of disease. Whether it be a simple diarrhoea or a more serious epidemic disease such as cholera, homeopathy has a history of helping with prevention as well as treatment.

Nosodes, for example – remedies made from the diseased tissue or discharge – are regularly used for prevention. Many can be obtained from homeopathic pharmacies or, if time is of the essence, can be made on site by rapidly potentising the source material. (If you have to resort to this, remember to take all precautions until the remedy has been fully potentised so you don’t become infected yourself).

The other option is to choose the standard homeopathic remedy that best matches the symptoms of the disease for which prevention is sought.

Both nosodes and standard remedies are listed below. Either can be used preventatively ahead of an outbreak but if an epidemic is already in progress, the “genus epidemicus” – the remedy that best matches the characteristic symptoms of the outbreak – will produce the best results. That remedy may be one of those listed or a different one altogether.

Remedies can be used in any potency from 6C to 200C; good results are dependent on getting the remedy right more than using a certain potency.

If none of the above potencies are on hand, dose with whatever is available knowing that homeopathy has an excellent safety record with non-addictive and non-toxic remedies.

How often a dose of the chosen remedy should be given will depend on the intensity of the person’s symptoms and how quickly they respond. Initial doses may be needed as often as every 5 minutes or at intervals of several hours. To find out more about dosing, read: How Often Should I Take a Dose of My Remedy.

Part 1: First Response Homeopathy: Remedies to Use in a Disaster (Disaster Strikes)