You are here: Home › Case Reports › Sandra’s Irritable Bowel and Other Problems 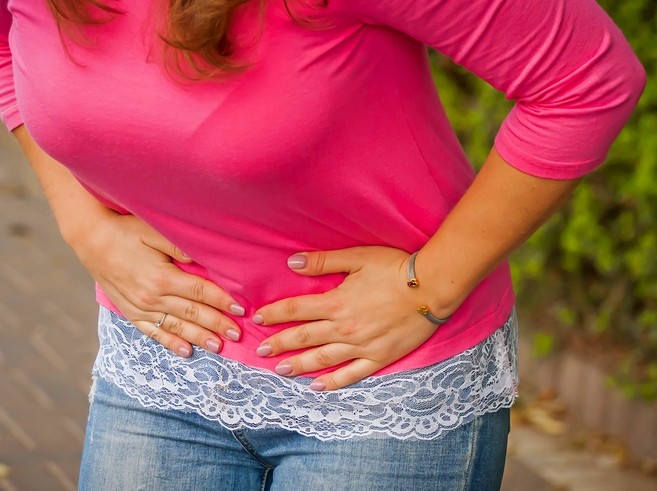 When people have bloated bellies, others may assume it is because they eat too much. But this isn’t necessarily true. Take Sandra’s story as an example.

Sandra was a 52-year-old woman desperate to find relief from the abdominal bloating and discomfort that had plagued her for the past 15 years.

Gone were the days of snug jeans and slinky dresses – she now lived in loose clothes and elasticised waists to accommodate her increasing waistline as the day progressed.  From mid-afternoon until bedtime she would swell, only to return to her normal size as she slept overnight. Sandra found that eating bread or fatty foods made the problem worse.

At Sandra’s first homeopathic appointment, I found that she also had a long history of other gastrointestinal problems. She was prone to painful constipation since childhood and in spite of being fed a diet high in fruit and vegetables, would only have a bowel motion every 3-4 days.

This pattern had continued into her adult life but during the last ten years the constipation had alternated with diarrhoea, especially during stressful periods or changes in routine. Her doctor diagnosed it as irritable bowel syndrome (IBS) and prescribed a range of medicines, such as Colofac and Mintec, which had only a minor effect.

Sandra also complained of feeling unwell and nauseated on waking in the morning if under stress, or if she missed a meal.

I think Sandra was surprised that I was interested in her other health problems, not just her bloating and IBS. (To a homeopath, a person’s health complaints are like pieces of a jigsaw puzzle – put them together and they show the complete picture of the disturbance and the remedies that may treat it.) This is what she told me …

Sandra experienced hot flushes at all times of the day and night which disturbed her sleep. (Being in her early fifties, Sandra was close to menopause).

She would also wake with painful foot cramps and thirst – something she quenched with a bottle of water by her bed.

Sandra also harboured a lifelong anxiety of the dark. When her husband was away, sleep was impossible unless she all lights and the radio were on. All in all, the resulting tiredness made it difficult for her to concentrate at work.

She was also worried about developing osteoarthritis, just as her mother had done. An athletic person who had always enjoyed exercise, she had recently noticed that she rocked as she walked and her back and hips felt stiff in cold weather. At times, sharp stabbing pains would shoot through her hips and increasingly the joints of her fingers would swell and stiffen slightly.

Sandra also complained of poor circulation, especially during cold weather, where her hands and feet would be mottled and cold.

Poor memory had also been a lifelong problem. Sandra found it difficult to concentrate, frequently lost or misplaced things, and had started to ‘hunt for words’ when talking to others. Keeping lists was a necessity.

When I asked Sandra to describe her temperament and personality, she said she was a diplomat. She disliked confrontation and often played the role of peace-maker. This had led to her being taken advantage of in the past but she was now setting clear boundaries.

She was also frightened of being alone and could not imagine life without marriage. She only enjoy her own company if she knew someone was close by.

Although Sandra’s many symptoms appeared unrelated they all pointed to the one homeopathic remedy – Lycopodium clavatum (Lyc).

Two weeks after taking it she reported that her abdominal bloating had worsened for the first three days but since then, had improved by about 50%.  Her night-time foot cramps and thirst improved, as had the hot flushes.

Overall, this was a good result for just two weeks of treatment and although Sandra said her memory and concentration were still poor, I was happy to re-prescribe the same remedy but in a different potency.

By the next appointment, 3 weeks later, further improvements had taken place – Sandra had started to sleep through the night. The hot flushes had disappeared and her memory was better.

Both the constipation and diarrhoea had improved and the bloating was hardly noticeable. The joint pains and stiffness were rarely a problem.

I prescribed Sandra a different potency of the same remedy to continue the healing process. At the next appointment her health problems were fully resolved and the remedy was no longer needed.

The homeopathic remedy Lycopodium, that matched the totality of Sandra’s symptoms, stimulated a healing response because of this matching effect. Sandra was then able to be much kinder to her body and drop her medicines one-by-one, saving a small fortune in the process – enough to pay for an interstate visit to her family the following Christmas.

Some people require several homeopathic remedies throughout the course of treatment, but Sandra needed only one in a succession of different potencies. Imagine curing such a wide range of ailments with just one remedy? I still find it amazing.

Night thirst is one symptom of diabetes so, at the first consultation, I recommended that Sandra make an appointment with her doctor to check on her blood sugar level. This she did and fortunately it was within normal range.

The worsening of Sandra’s bloating for the three days following her first dose is called a homeopathic or similar aggravation. Read about this type of aggravations and what it means at: Tutorial 15: What to Expect