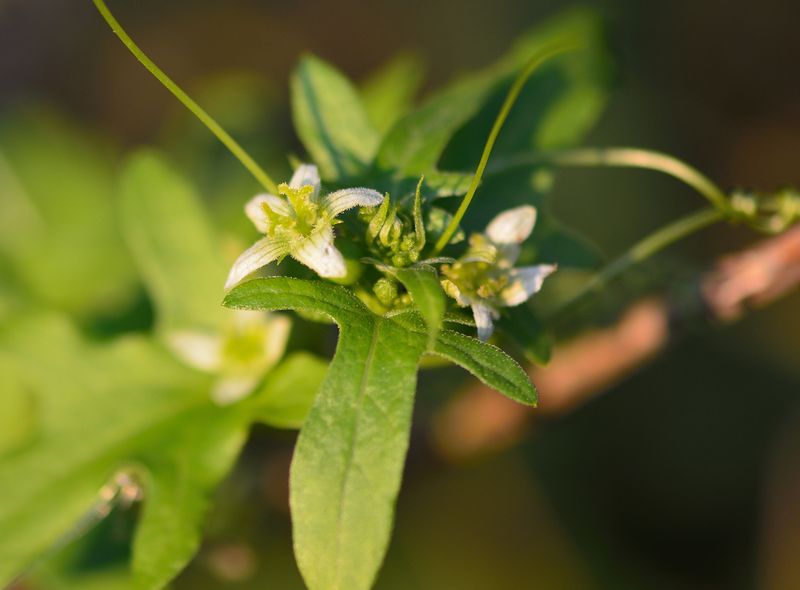 Homeopathic Bryonia is prepared from the scrambiling white bryony vine.  Bryonia complaints are worsened by movement and relieved by rest and stillness. This keynote extends the mental-emotional sphere – Bryonia patients are irritable, dislike being disturbed, and want to be left alone. They are thirsty but drink infrequently, and then in large amounts. Inflammatory complaints have a slow rather than rapid onset. Injuries and inflammations feel better for pressure – even to the point of lying on them – and may be worsened by changes in the weather.

All complaints < on motion.

Constipation (no desire) or diarrhea, < mornings on beginning to move.

Sitting up causes nausea and faintness.

Modalities: < from motions, warm weather after cold. > from quiet, lying on painful side.

Cough, dry, hard, racking, with scanty expectoration; with splitting headache; delirium, about the business of the day; (typhoid) headache; < stooping; ironing; hot weather; coughing; motion, vertigo; with nausea, and faintness; < from sitting up after lying down. Pressure, as from a stone, at pit of stomach relieved by eructation.

Mammć heavy, of a stony hardness; pale, but hard; hot and painful.

As in Pulsatilla, so in Bryonia, the leading characteristic lies in its “modality.” Three words express it –aggravation from motion.

What is aggravated on motion? Sufferings of almost any and every kind. We will not undertake to enumerate them. All that Hering says in his cards on that line is -“Joints red, swelling, stiff with stitching win from slightest motion,” and this so far as it goes is genuine, but it is only the beginning of all the ailments that are < on motion.

Look in “Guiding Symptoms,” under “Motion,” and see the long list of symptoms aggravated by motion, and even these do not cover all. Now we begin to realize the value of this modality.

It makes no difference what the name of the disease, if the patient feels greatly > by lying still and suffers greatly on the slightest motion, and the more and longer he moves the more he suffers, Bryonia is the first remedy to be thought of, and there must be very strong counter-indications along other lines that will rule it out.

Nor does it make much difference what organ or tissue is the seat of the disease, mucous, serous or muscular, the same rule applies.

Another very valuable modality of Bryonia is again expressed in three words –amelioration from pressure. This is the reason the patient, much to the astonishment of the nurse, wants to lie on the paintful side or part. (Opposite Belladonna, Kali carbonicum).

No one can realize the value of these two modalities until he has often met them at the sick bed and witnessed the prompt relief from the use of Bryonia.

When writing upon Pulsatilla, we noticed the characteristic action of that remedy upon the mucous surfaces. Here Bryonia acts just as characteristically, but it is so different.

With Bryonia it is excessive dryness or lack of secretion in them. It begins in the lips, which are parched, dry and cracked, and only ends with the rectum and stools, which are hard and dry as if burnt. The same condition is undoubtedly present in the stomach. which is evidenced by the excessive thirst; which can only be satisfied by large draughts of water; a little does not satisfy.

The same condition obtains in the lungs and bronchia, which causes hard, dry cough with little or no expectoration, and with soreness and pain in the chest when the patient coughs. (Natrum sulphuricum has loose cough with soreness).

The urine is scanty and only exceptionally (or as I would express it reactionally) copious. We must remember that every remedy has a dual action. These two actions are termed primary and secondary. I think that the so-called secondary action is only the reaction of the organism against the first or primary (so-called) action of the drug.

For instance -the real action of Opium is to produce sleep or stupor, the reaction is wakefulness; of Podophyllum, Aloes, etc., catharsis; the reaction constipation, and I think that the truly homoeopathic curative must be in accord with the primary (so-called) effects of every drug in order to get the best and most radical cure, but if given for the secondary (so-called) symptoms, the primary ones having passed by, we should carefully inquire for all the symptoms which have preceded those which are present; and taking both past and present, let them all enter into the picture whose counterpart is to be found in the drug which is to cure. Any other method is only palliative and not curative.

Bryonia has also a very decided effect upon the serous membranes. It is very useful in the second stage of inflammation, after the stage of serous effusion has set in. In most of these cases the first stage has been attended by symptoms calling for the exhibition of such remedies as Aconite, Belladonna, Ferrum phos., etc., but not always; and right here let me call attention to the most characteristic pains of this remedy.

They are stitching pains. Now observe, the characteristic pains of inflammatory affections of the serous membranes are stitching pains; this is the reason why Bryonia comes to be such a regal remedy in pleuritis, meningitis, peritonitis, pericarditis, etc. The subjective symptoms corresponding to the remedy must go down before it, and the objectives must as surely follow.

Only one remedy can equal Bryonia for stitching pains, viz, Kali carbonicum. (Stitching pains in chest are particularly found under Bryonia, Kali carb., Natrum mar., Squilla and Mercur. viv.). And there is this difference between them:

The Bryonia stitches come on or are aggravated by the least motion, while those of Kali carbonicum will occur whether the patient moves or not, (Bryonia > by pressure, Kali carb., not). But in both remedies they cry out sharply with the pains.

Apis has pains which cause the patient to cry out sharply, but they are stinging pains –like a bee sting. All these three are great remedies for effusions into serous cavities, and Sulphur precedes and follows equally well anyone of them.

A word right here in regard to interpolating Sulphur, when, as we express it, “the seemingly indicated remedy does not act.” Some would stumble over that, and ask -as they would have a right to do- how about your similia, etc., in such a use of Sulphur?

I answer –Sulphur is a remedy of wide range of action, and covers more perfectly those conditions and symptoms which are the outgrowth of psora than any other remedy; so it does meet the case complicated by psora very often, and either cures it or removes the complication so that the other remedies may act. But remember it will not always do it, and other antipsoric remedies must be chosen. It must be the simillimum for the psoric condition.

Bryonia stands alongside of Nux vomica and Pulsatilla for disorders of alimentation. All three remedies have a sensation as of a stone in the stomach, Bryonia and Nux vomica more so than Pulsatilla.

The gastric derangements of Bryonia often occur as a result of dietetic errors, especially when warm weather sets in after cold. Those of Nux vomica more from continued over-eating and inactivity, the abuse of drugs, coffee, tobacco or alcoholics; Pulsatilla from too rich foods, pastries, fat foods and ice cream (in excess); a little ice cream feels good in the Pulsatilla stomach, but much overdose the matter, because it is too rich.

All three remedies have attacks of diarrhea, although constipation is most characteristic of Bryonia and Nux vomica, and is only exceptionally found under Pulsatilla.

All have white, sometimes very thickly-coated tongue, but taking into account the causes of these gastric and bowel troubles, temperament and modalities there should not be much difficulty in choosing the right remedy for any case.

So far as temperament is concerned, Bryonia is like Nux vomica, but Bryonia has much more of the “rheumatic diathesis.” Both are easily irritated or angered, and are oftenest found indicated in spare, dark-complexioned subjects. Both are aggravated generally on motion, by Bryonia very much the more so, while Pulsatilla is sometimes like Rhus toxicodendron relieved by motion.

Now a few special indications for Bryonia and we will have it:

“Bursting headache, as if it would split the head open, aggravated by stooping; coughing; ironing; opening or moving the eyes; moving any way; in hot weather. Nausea and faintness when rising up, relieved when lying still.”

“Suppression of lochia with bursting headache.”

“Suppression of milk, menses, measles or rash of scarlatina, or where all these are slow in appearing; of course the other Bryonia symptoms must be present.”

These are some of the peculiar symptoms which cannot be ranged under any general head, and are excellent leaders to the consideration of Bryonia, all and each of which will be found associated with the more general characteristics already noticed.

The dominant school do not know what they have lost in not being acquainted with the virtues of this remedy, as developed in our provings and clinical use, but we know what we have gained.