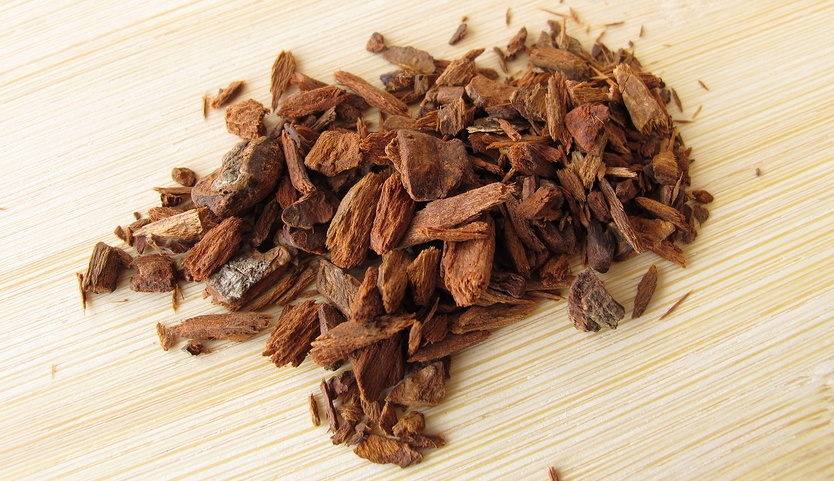 China Officinalis (Chin.) is a useful remedy for exhaustion, weakness, anaemia, headache, and digestive upsets that arise from loss of body fluids (haemorrhage, diarrhoea, sweat, vomit, etc). Those who need China are sensitive to the cold, and symptoms worsen during foggy, cold, damp weather or Autumn. Complaints feel worse from slight pressure or touch but are relieved by firm pressure, and symptoms return at regular intervals such as the same time each day, or every seven days. China may also be indicated when there’s a family history of malaria.

China Officinalis (Chin.) is available from our online store as a single remedy, and as part of the following Complex (combination remedy): Convalescence.

Debility and other complaints after excessive loss of fluids, blood-letting, etc.

Haemorrhages profuse, with faintness, loss of sight and ringing in the ears.

Great flatulence, with sensation as if the abdomen were packed full; not > by eructation or passing flatus.

Periodical affections, especially every other day.

Modalities: < from slight touch, least draft of air, every other day. > by hard pressure on painful part.

Sweat, with great thirst; sweating during sleep, on being covered: This remedy is used by both schools of medicine for conditions of great weakness and debility.

The old school, as they always do, prescribe it for all cases of debility, on general principles, under the name of tonic. It remained for Homoeopathy to indicate its exact place here.

Hahnemann expresses it: “Debility and other complaints after loss of blood or other fluids, particularly by nursing or salivation, bleeding, cupping, etc., or whites, seminal emissions, etc.”

I would add profuse suppuration and long continued diarrhea. If the depletion has been sudden, as from a haemorrhage from the womb, lungs, bowels or nose, there will be faintness, loss of sight, ringing in the ears, etc. For this state of things we have a “friend indeed” in China, and it should be given in frequently repeated doses, not too low, until reaction is established; then at longer intervals, as occasion demands.

If the debility is the effect of a slow and long-continued drain the symptoms that might indicate it must be sought in the Materia Medica; our space forbids trying to note them here, but prominent among them are pale, sallow face, sunken eyes with dark rings around, throbbing headaches, night sweats, and sweats easily on least motion or labour.

It is always well when a patient comes to us in a very debilitated condition to think of China, and to make careful inquiry for some debilitating waste that would account for it; for if it is a woman she may be suffering from a very profuse leucorrhśa, which from delicacy she will not mention, or if a young or even married man, he may be suffering from seminal losses, of which he would not speak if not encouraged to do so.

Again this remedy has its sphere of usefulness in disorders of the alimentary canal. It has loss of appetite, but canine hunger is more characteristic.

It is a great flatulent remedy, the choice often remaining between it, Carbo veg. and Lycopodium. H. N. Guernsey expresses it about right in these words -“Uncomfortable distention of the abdomen, with a wish to belch up, or a sensation as if the abdomen were packed full, not in the least relieved by eructation.”

Such patients are troubled with slow digestion, and as they express it: sometimes it seems as if the food all turned to gas. They feel so full and oppressed they can hardly breathe and still will feel hungry at meal-time.

That the process of digestion is seriously impaired is shown by a tendency to diarrhoea, especially from eating fruit. The stools are watery, yellow, brownish, or light colored and undigested, and what is not generally found under other remedies they are painless.

The stools are also accompanied with large discharge of flatulence (Calcarea phos.). This is in accord with the windy condition of the bowels generally.

This condition of abdomen with attending diarrhoea is often found in children, and the child is weak, pale, with dark rings around the eyes. Here China is the remedy, not Cina on the theory of “worrums,” and it is astonishing what improvement follows in a short time.

Now as to this remedy as an anti-periodic.

The popular use of it by the old school, and the laity under their instruction in this sense, or as a panacea for all so-called malarious diseases, is a curse to the race.

That it is a great remedy, when indicated by the symptoms, for periodical affections, whether of malarial origin or not, is true, and so it is true of Eupatorium Perfoliatum, Ipecacuanha, Natrum muriaticum, Arsenicum album, and a host of other remedies.

Affections that do not come strictly under the head of malarial, if they are worse every other day, should call attention to Cinchona.

I remember a bad case of inflammatory rheumatism, which had been treated by an eclectic physician with local applications until the disease had been driven to the heart, which I quickly relieved by China, being led to its choice by this every-other-day aggravation of the symptoms. Of course, there were other indications for the remedy, but this was the key that helped to unlock the case.

I have seen a case suppressed time and again with it, return as often, for over a year and a half that I cured with a single prescription of Eupatorium perfoliatum. And so with Natrum muriaticum and Arsenicum album. With all its vaunted power over malarial affections, especially intermittent fever, the indications for its use are not so clear cut as for many other remedies.

I once had three cases of intermittent fever in one family, living in the same house and exposed to the same influences. Quinine failed to cure any one of them, and a different remedy, as indicated by the symptoms according to the homoeopathic law of cure, was required for each case and promptly cured it.

The respective remedies were Eupatorium perfoliatum, Ignatia and Capsicum. Now any good homśopath can tell you the leading symptoms for all three remedies.

I once knew a druggist who told me that he had at last discovered one thing that mothers-in- law were good for. Of course I asked him what it was. I wanted to know. He answered, to try patent medicines on. She died (the mother-in-law) shortly after.

Well, there is one thing that quinine in the hands of the average old school physician is good for, and that is to make patients for homoeopaths, for we find more patients to treat coming from its abuse than we find calling for its use as a curative, and from a purely business standpoint we are greatly indebted to them (the allopathic) for a good bit of practice. But how in the name of gratitude; we can ever pay them out of the poisonous results of our little pill practice I don’t know.

Now what are the best remedies for what is called the Quinine cachexia? Here, as ever, we must answer, the indicated one. Ipecac., Arsenicum, Natrum mur., Pulsatilla and Ferrum are often indicated, but they do not cover all cases any more than do Hepar Sulph., Nitric acid or Kali hydroiodicum, all cases of chronic mercurial poisoning.

It is nonsense -worse than nonsense- it is old-schoolism to say I gave Nux vomica because the patient had taken pepper tea, or Pulsatilla for Quinine, or Kali. hydroiod. for Mercury. We do not prescribe Aconite because the patient has fever (the old school does), but because the patient has with the fever other symptoms which enable us to choose between Aconite and many other remedies that have fever also, and this to the exclusion of all the rest. This is science again.

China is one of the best remedies in chronic liver troubles.

There is pain in the right hypochondria, and often the liver may be felt below the ribs, enlarged, hard and sensitive to touch. The skin and sclerotica are yellow, the urine dark colored and stools light, lacking the color due to a proper secretion of bile.

Now if in addition to all this we have in part or whole the abdominal symptoms so characteristic of this remedy China; will do excellent service. It is equally good in splenic diseases which closely resemble the splenic troubles resulting from the abuse of Quinine. I have found the 200th do better than lower potencies in these troubles.

I wish to say in addition to what has already been said of China for haemorrhages, that the bleeding may come from any or every outlet or orifice of the body. Carbo veg., Ferrum, Crotalus horridus, Phosphorus and Sulphuric acid also claim attention here.

China has excessive sensitiveness of the nervous system. The special senses seem too acute; the mind is unpleasantly affected, and nothing as more characteristic of this remedy than its extreme sensitiveness to touch. (Asafśtida, Hepar and Lachesis).

It affects the skin all over the body, even the hair feels sore (so says the patient) because moving the hair hurts the sensitive scalp, and in addition to this, one peculiar thing is that while the lightest touch will increase to an extreme degree the pains of the diseased part, hard pressure relieves. That seems impossible, but is true nevertheless. The sensitiveness is so extreme that a current of air blowing on the part will cause great pain and suffering.

Plumbum also has this excessive hyperćsthesia, and I once cured a very obstinate case of post-diphtheritic paralysis, being led to its administration by this symptom. Capsicum also has it. The patient can hardly bear to be shaved on account of it.