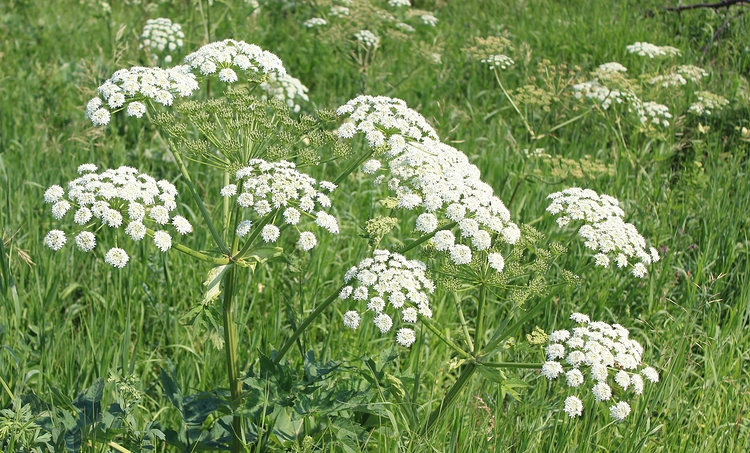 Hemlock (Conium Maculatum) is probably best known as the poison by which Socrates took his life. Prepared in homeopathic potencies it is a safe treatment for types of paralysis, slowness and rigidity (mental or physical), hard glandular swellings or tumours, and complaints arising from sexual abstinence or suppression of sexual desire. Those needing Conium avoid the light, like salt, coffee and sour things, and find that wine or milk disagrees. Physical slowness or rigidity is worse on first moving but improves with continued motion.

Conium Maculatum (Con.) is available from our online store as a single remedy in either pills or liquid, and as part of the following Complexes (combination remedies): Prostate Enlargement; Styes.

For acute and self-limiting complaints, take one pill or five drops of the remedy every 1 to 4 hours (once every hour for intense symptoms or once every 4 hours for milder ones). Once an improvement is noticed, stop dosing and repeat the remedy only if symptoms return. If there is no improvement at all by three doses, choose a different remedy or seek professional guidance. Chronic symptoms or complaints require a course of professional treatment to manage the changes in potencies and remedies that will be required.

Vertigo, especially < on turning the head, or looking around sidewise, or turning in bed.

Swelling and induration of glands, after contusions or bruises.

This is another of the so-called spinal remedies. I will not, as I did under Cocculus quote what authorities say from a pathological standpoint. All seem to agree that it paralyzes from below upwards, and the poisoning of Socrates with it is adduced in illustration. It ought to be a remedy for locomotor ataxia The strongest characteristic I know, from a homœopathic standpoint, it its peculiar vertigo, which is much aggravated by turning the head sidewise. (Coloc., turning head to left). Turning over in bed is the same. Some say lying down in bed and turning over. I have found that it is not so much the lying down as it is the turning of the head sidewise, whether in an upright or horizontal posture.

I once treated a case of what seemed to be locomotor ataxia with this remedy.

The patient had been slowly losing the use of his legs; could not stand at the dark; and when he walked along the street would make his wife walk either ahead of him, or behind him, for the act of looking sidewise at her or in the least turning head or eyes that way would cause him to stagger or fall.

Conium cured him. It would always aggravate at first, but he would greatly improve after stopping the remedy. The aggravation was just as invariable after taking a dose of Fincke’s c. m. potency as from anything lower, but the improvement lasted longer after it.

Taking an occasional dose from a week to four weeks apart completely cured him in about a year. It was a bad case, of years’ standing, before I took him.

I have often verified this symptom in the vertigo of old people, where it is most frequently found; but it also often accompanies various affections in all ages, and especially is found in ovarian and uterine affections. I know of no remedy that has this symptom so strongly.

There is a form of ophthalmia in strumous subjects which calls for Conium in preference to any other remedy, and the peculiar, prominent and uncommon (as Hahnemann says, Organon, § 153) symptom is, photophobia, intense, out of all proportion to the objective signs of inflammation in the eye. The pains are worse at night and terribly aggravated by the least ray of light, relieved in dark room and by pressure.

There may or may not be ulcers on the cornea. Conium is also one of our best remedies for falling of the eyelids, as are three other remedies, viz: Gelsemium, Causticum and Sepia. “Swelling and induration of glands, with tingling and stitches after contusions or bruises.” Many cases of lumps or swellings in the breasts (for which Conium seems to have a particular affinity) have disappeared under the action of this remedy. Even cancerous affections of breasts (Asterias rubens), uterus and stomach have been helped or cured, especially if the trouble seems to have originated in a blow or injury to the part. It is perhaps the first remedy to be thought of in all cases of tumors, scirrhous or otherwise, coming on after contusions, especially if they are of stony hardness and heavy feeling. Conium and Silicea both have hardness of mammæ, Conium right, Silicea left nodules (Carbo animalis, Conium, Silicea); acute lancinating pains. (Asterias). Again it is to be especially considered if at every menstrual period the breasts become large, sore and painful, aggravated by the least jar or walking.

In all the scirrhous affections of the breast, womb or other parts the pains of Conium are burning, stinging, or darting, and may make one think of Apis mellifica. The other symptoms must then decide between them.

Conium has marked action upon the sexual organs. In the male there is great weakness of the organs. He has intense desire and amorous thoughts, but is unable to perform. He has emissions at the very thought or presence of a woman. The erections are insufficient, last only a short time, or “go back” on him in the act of embrace, and he suffers with weakness and chagrin afterwards. This affects the mind and hypochondriasis of the bluest blue takes possession of him.

This condition of mind may obtain in both sexes; as a result of too free, and also especially too infrequent indulgence; or, excessive abstemiousness. Hence Conium becomes a good remedy for old bachelors and old maids. If the vertigo is also present in such cases Conium is sure to be of great benefit.

Intermittent flow of urine is very characteristic (Clematis). One might think that this was owing to a paralytic condition of the bladder. I don’t know; but I do know that the symptom often occurs in the hypertrophy of the prostate gland incident to old age and Conium helps. “Sweats day or night; as soon as one sleeps or even when closing the eyes,” is a characteristic found under no other remedy that I know of. (Reverse Sambucus).

Dr. Adolph Lippe once made a splendid cure of complete one-sided paralysis in a man 80 years of age with this remedy, and was guided to it by this symptom. I think it would be rather a difficult task to give a correct pathological explanation of such a symptom; but there is a reason, and whether we can give it or not we can cure it if we have a corresponding one appearing under a remedy; where a cure is at all possible.

It is interesting to follow out the connections of symptoms.

Take for instance the single prominent symptom of Conium, vertigo.

Vertigo on looking up, Puls., Silic.

Vertigo on watching, or loss of sleep, Cocc., Nux vom.

Vertigo on the least noise, Therid.

Vertigo while or after eating, Grat., Nux v., Puls.

Vertigo as if the bed turned, Con.

Vertigo when rising from stooping, Bellad.

A good understanding of such connection often starts the prescriber in the “short cut” route to the remedy in a case.