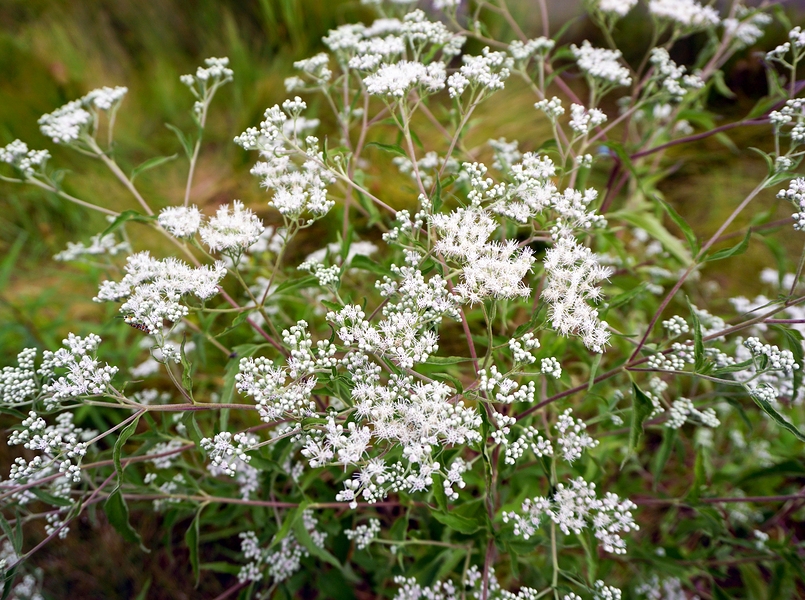 The need for Eupatorium Perfoliatum (Eup-per.) is easily recognised by its symptom of intense pains in the bones – “as if the bones are broken”.  This one symptom alone has led to its successful use during cases of malaria, influenza and fever. Eup-per. was the main remedy needed during the 1918 flu pandemic and has been consistently used for influenza ever since when its keynote symptom was present.

Typically, the person will be very restless with the pains but motion won’t relieve the soreness. They’ll feel worse in cold air and fevers may recur at regular intervals (as with malaria).

Eup-per. has also been successfully used for pain associated with true fractures or when there is a history of malaria.

Eupertorium Perfoliatum (Eup-per.) is available from our online store as a single remedy in either pills or liquid, and as part of the following Complexes (combination remedies): Fractures (Broken Bones); Winter Defence.

Painful soreness of eyeballs; coryza; aching in every bone; prostration in epidemic of influenza (La Grippe).

Deep hard achings as if in the bones, with sore, bruised feeling all over, back, arms, wrists, legs.

Vomiting of bile between chill and heat. Chill 7 to 9 A.M.

Hoarseness in the morning, with soreness in chest when coughing; holds it with his hands.

When writing upon Arnica, I there compared several remedies which have a sensation as if bruised. This remedy might also have been mentioned there, as it has “Bruised feeling as if broken, all over the body.” (Arnica, Bellis, Pyrogen.) The bruised feeling of Eupatorium is accompanied with a deep hard aching, as if in the bones.

Let us quote some of the symptoms illustrating:

“Intense aching in the limbs and back as if the bones were broken.” “Aching in the bones of the extremities, with soreness of the flesh; soreness of the bones.” “Soreness and aching of the arms and forearms; painful soreness in both wrists as if broken or dislocated.” “Soreness and aching of lower limbs; stiffness and general soreness when rising to walk.” “Calves of the legs feel as if they had been beaten.” “Aching pains as if in the bones, with moaning.”

These symptoms are all characteristic and may be found in influenza, bilious or intermittent fever, bronchitis, especially of the aged, and many other diseases.

This is what gave the popular name “bone-set” to Eupatorium, because on account of the severe aching, as if the bones were broken, that occurred in an epidemic of intermittent fever this was the remedy that cured, or “set the bones.” The epidemic was called break-bone fever.

Of course this curative property of the drug was then discovered by accident, but abundant proving and verification have demonstrated the homeopathicity of such cures. So with Apis in dropsies.

If this remedy has no curative properties other than it has for intermittent it would still remain a priceless boon to Homeopathy. It cures a kind of intermittent for which the great anti-periodic (Quinine) of the old school can do little or nothing.

Three characteristics stand out prominently, to indicate the cases in which it is appropriate:

2nd. The intense aching in the bones before the chill.

3rd. Vomiting of bile between chill and heat.

There are, of course, other symptoms which may appear in a Eupatorium case, but these three are a sure guide, and many authentic cures corroborate the genuineness.

This remedy is also very useful in diseases of the respiratory organs. In the so-called la grippe of recent years it has proven in my hands very valuable; the “aching all over as if in the bones” being the leading symptom.

It also has hoarseness in the morning, like Causticum but while Causticum has more burning and rawness Eupatorium has more soreness in the chest; Ranunculus bulb. has pain in the chest when walking, turning, from touch or weather changing; when coughing has to support the chest with the hands, it hurts so (Bryonia, Drosera, Kreosot., Natrum sul., Sepia).

Both remedies have aching in the bones especially in influenza or la grippe, but Eupatorium the most. If either of these remedies fails to cure the hoarseness, Sulphur will often complement them. Altogether, Eupatorium is to be remembered in many diseases having these characteristic symptoms.

Eupatorium is especially adapted to worn out constitutions of old people or inebriates. Bryonia is near analogue, having free sweat, but pains keep patient quiet, while Eupatorium has scanty sweat, but pains make the patient restless.