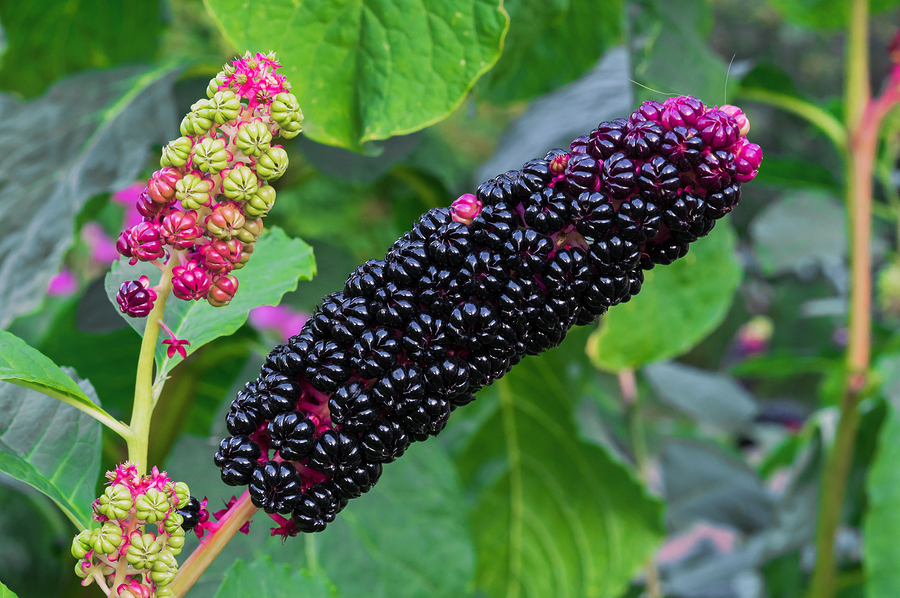 Pytolacca decandra (Phyt.) is a homeopathic remedy prepared from the root of the poisonous pokeweed plant, Phytolacca americana.

What Is Phytolacca Decandra (Phyt.) Used For?

Phytolacca Decandra (Phyt.) is a homeopathic remedy for problems of the glands, joints, and connective (fibrous) tissue of the body.

Affected glands will be hot, inflamed, and swollen which makes it a useful remedy for types of mumps and mastitis as well as other gland-related problems.

Connective tissue is also affected, especially ligaments and tendons of joints, and the person complains of being “sore all over” (eyeballs, breasts, kidneys, neck, shoulders, back, forearm, knees).

Pains worsen at night and during cold weather. They “wander” about the body or are felt as sudden shooting stabs or stitches.

Discharges, if any, are usually tough and stringy.

Where Do I Find It?

Phytolacca Decandra (Phyt.) is available from our online store as a single remedy in either pills or liquid, and as part of the following Complexes (combination remedies): Mastitis; Tonsillitis.

Homeopathy is a 200-year system of medicine. Early medical homeopaths recorded initial provings, remedy relationships, and their early experiences with each remedy, in great detail.

Today, these writings give a fascinating insight into the symptoms and clinical conditions for which homeopathy was, and still is, used.

The following extract, with minor editing, is drawn from one of these early texts.

Phytolacca decandra is one of our most valuable remedies for sore throat, and the indications are plain.

The throat becomes generally inflamed; the tonsils swell and become very red at the first, and then white spots appear which (unless checked) soon spread and coalesce and form patches of a diphtheritic appearance.

There are shark pains often running up into one or both ears.

These are the local throat symptoms, and the constitutional symptoms are:

Intense head and backache, and a sore, aching, bruised feeling all over the body, causing the patient to groan, and while, like Rhus toxicodendron, he feels as if he must move, the act of moving greatly aggravates all his pains and soreness.

The patient is also greatly prostrated, and sitting upright makes him faint and dizzy like Bryonia.

There is high fever, for the pulse is very quick; but the heat, like that of Arnica, is mostly in the head and face while the body and limbs are cool.

Now these symptoms present, it makes no difference whether the case is called tonsilitis, diphtheria or scarlatina. Abundant experience in my own person and observation with my patients has proven Phytolacca to be a remedy of inestimable value.

Nor is it necessary to give it in twenty drop doses of the mother tincture, and gargle in addition, as some advise, but it will in the potentized dose do much better, the same as other homeopathic remedies.

I have done some good work with this remedy in follicular pharyngitis, especially when in public speakers the voice gave out from over-work and there was much burning in the throat, as of a hot substance there. In this kind of sore throat I have the best success with the remedy very high.

Now let me call attention to a symptom of this remedy that has been of great value to me: “Irresistible inclination to bite the teeth or gums together.” On this indication I have often relieved the complaints of various kinds incident to the period of dentition.

I once had a case that was sent up to the country from New York City. The child had been sick a long time, with cholera infantum (entero-colitis), and its physicians said it must leave the city or die. But country air and change of diet brought no relief.

The little fellow was greatly emaciated, having frequent loose stools of dark brown color, mixed with slime or mucus of the same color.

After trying various remedies I discovered that the child wanted to bite its gums together, or to bite on everything that it could get into its mouth, and the mother then told me that this had been the case all through its sickness.

Phytolacca produced immediate relief of the symptoms and rapid recovery followed. I have since verified this symptom several times.

Phytolacca is also one of our best remedies for mastitis. The breasts are very hard, greatly swollen, hot and painful.

The choice often lies between this remedy and Bryonia, and they complement each other. Almost every case of swollen breasts with the milk fever, when the breasts fill for the first time after confinement, may be speedily relieved with one or the other of these two remedies.

If the case should have gone on to suppuration, with large fistulous, gaping and angry ulcers discharging a watery or fśtid pus, Phytolacca is still the remedy; and will often do more good than Hepar sulphur. and Silicea.

But the choice sometimes has to be made between other remedies such as:

Croton tiglium. The pain runs through to the back when child nurses. (Silicea, Pulsatilla).

Phellandrium. Pain runs along the milk ducts between the acts of nursing.

Lac caninum. The breasts are greatly filled and so sore that their own weight hurts the patient, who wants to hold them up and shrinks from the least jar.

Of course Aconite, Apis and Belladonna must not be forgotten, and have as positive indications for their use as any of the above remedies. (See also Castor equorum.)

I have removed a great many suspicious lumps or tumors in the breasts, some of them of years’ standing, by giving a dose of Phytolacca c. m., once a month, during the wane of the moon. What has the moon to do with it? I do not know.

I cure goître the same way (but not with Phytolacca), and was led to that way of administration by a suggestion of Jahr. That some diseases have their aggravations in certain times of the moon I know, and that certain remedies act better then, I know just as well.

Do not forget that the bruised, sore feeling of Phytolacca that we noticed at length when writing of Arnica is sometimes markedly present in sciatica, for which it is one of our successful remedies.

The characteristic symptom for Phytolacca in this painful affection is, that the pain runs down the outer side of the limb. Sciatica is one of the complaints in which Homeopathy has scored some of its most brilliant victories over the anodyne treatment of the old school.

Periosteal rheumatism, where the pains are especially worse in wet weather, sometimes finds a remedy in Phytolacca. This drug seems to resemble in its action on the periosteum, glands, bones and skin Kali hydroiodicum, and the two remedies complement each other, of course, with indications, or the choice may sometimes lie between them.

H.C. Allen says: Phytolacca occupies a place midway between Bryoniaand Rhus tox., and will often help when these seem indicated but fail. It is curious to note that almost every chemical remedy has a closely resembling relative from the vegetable kingdom.

Kali hydroiodicum and Phytolacca, Aloes and Sulphur, Cepa and Phosphorus, Chamomilla and Magnesia carb., China and Ferrum, Belladonna and Calcarea ost., Ipecac and Cuprum, Bryonia and Alumina, Mezereum and Mercury, Pulsatilla and Kali sulphuricum. This has been before mentioned by Hering.