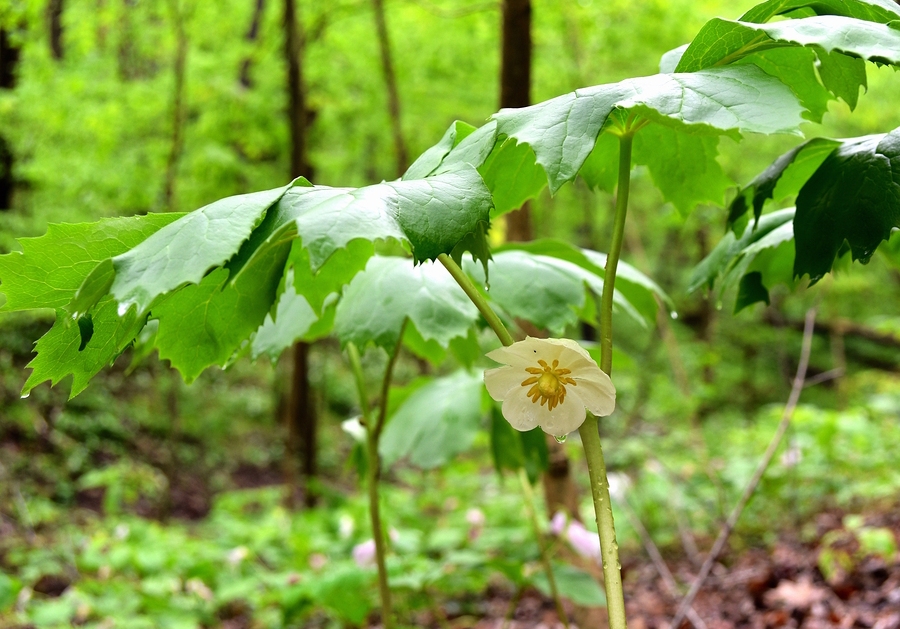 Podophyllum Peltatum (Podo) is one of the remedies to consider for gastrointestinal upsets and prolapsing of the rectum or uterus. It also suits types of colitis and inflammatory bowel disorders. Stools (bowel motions) will be watery, profuse, loose or explosive).

Podophyllum peltatum (Podo.) is available from our online store as a single remedy in either pills or liquid, and as part of the following Complex (combination remedy): Irritable Bowel (IBS).

Persistent gagging, without vomiting; rolling the head and moaning with half-closed eyes.

Great loquacity during the fever stage, especially with jaundiced skin.

Prolapsus of uteri; prolapse of rectum.

There are many remedies that are powerful cathartics, and this is one of them. A superficial understanding of our law of cure would lead a novice to conclude that all one would have to do for a case of diarrhœa would be to prescribe Podophyllum. Of course failure would often be the result.

The simple fact of diarrhœa is only a factor in the case, where the selection of a remedy for its cure is concerned; for each cathartic has not only a diarrhœa, but a peculiar kind of diarrhœa which no other remedy has. The diarrhœa of Podophyllum is characterized by:

1st. The profuseness of the stool.

2nd. The offensiveness of the stool.

3rd. The aggravations in the morning, hot weather, and during dentition.

Then again the concomitants are very peculiar. There is often present prolapsus ani, sleep with eyes half closed and rolling the head from side to side and moaning; frequent gagging or empty retching. These symptoms present have often led to the administration of this great remedy with very gratifying results.

In regard to the profuse stools, they are so much so that they seem to drain the patient dry at every one. They may be yellow or greenish watery, and when watery, always profuse. Then again they may be pappy and profuse (Gambogia), or mucous and scanty, but always with Podophyllum very offensive. I have cured these cases in all stages.

In the first onset of the disease, as well as in the very far advanced and apparently hopeless cases of cholera infantum, the 1000th potency (B. & T.) has done the best for me.

Notwithstanding the fact that this remedy is one of quite a list set down for liver troubles, both with looseness of the bowels and constipation, I have not found it very efficacious in the latter. I can readily see how it might be, however, in liver troubles with constipation which had followed a preceding diarrhœa, just as Opium might cure the sleeplessness that followed preceding stupor, and Coffea sleepiness which followed preceding excitement.

All drugs have their double action, or what is called primary and secondary action. But the surest and most lasting curative action of any drug is that in which the condition to be cured simulates the primary action of the drug. For, as I have held elsewhere, I think that what is called secondary action is really not the legitimate action of the drug, but the aroused powers of the organism against the drug. So the alternate diarrhœa and constipation in disease is a fight, for instance, between the disease (diarrhœa) and the natural powers resisting it.

It is of considerable importance then to be able to recognize in such a case whether it is the diarrhœa or constipation that is the disease, against which the alternate condition is the effort of the vital force to establish health.

Yet such an understanding is not always absolutely imperative, for in either case there are generally enough concomitant symptoms to decide the choice of the remedy. Indeed, the choice must always rest upon either the peculiar and characteristic symptoms appearing in the case or the totality of them.

None but the true homœopathist learns to appreciate this. Here is where what is called pathological prescribing often fails, for the choice of the remedy may depend upon symptoms entirely outside of the symptoms which go to make up the pathology of the case, at least so far as we as yet understand pathology.

Podophyllum has a great desire to press the gums together during dentition. When this symptom is prominent, the choice will have to be made between this remedy and Phytolacca, both being great remedies for cholera infantum.

In the nausea of Podophyllum vomiting is not so prominent as with Ipecac, but the gagging without vomiting is very marked, as it is also under Secale cornutum.

Rumbling in the abdomen, especially in the ascending colon, is strong indication for this remedy even in chronic bowel troubles.

Prolapsus ani is also a prominent symptom of this remedy, so also is prolapsus of the uterus, especially after straining, over-lifting or parturition. Here the choice will often be between Podophyllum, Rhus tox. and Nux vomica.

Podophyllum seems also to have a strong affinity for the ovaries, and some remarkable cures have been made on the symptom, -“Pain in right ovary, running down thigh of that side.” (Lilium tig.) Sometimes there is also numbness attending. Ovarian tumors have disappeared under the action of this remedy, when this symptom was present.

I once made a brilliant cure of an obstinate case of intermittent fever with this remedy. The chills were very violent and were followed by intense fever with great loquacity. There was also great jaundice present. When the fever was past the patient fell asleep, and on awakening did not remember what he had said in his loquacious delirium.

The range of this remedy does not seem very wide, but within its range its action is surprisingly prompt and radical.