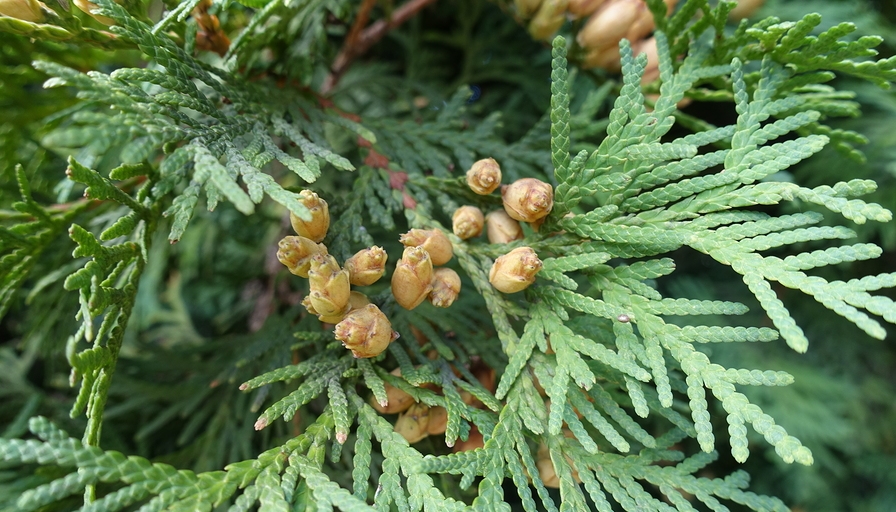 Those who need Thuja struggle with self-confidence: they feel worthless and unattractive, and believe that nobody would love them if they knew what they were really like. As a result, they become desperate to ‘fit in’ and hide behind a manufactured persona to present to others as a cover for their perceived shortcomings.

Those who need Thuja may either crave, dislike, or be affected by onions, and sometimes, garlic. They also desire tea, are affected by cold, wet weather, and discharges (pus, mucus) will be yellow-green or green. The urogenital and skin are the most often affected areas of the body but symptoms in general tend to be worse on the left side. Other distinctive symptoms include pains being felt in “small spots” and chronic complaints improving during head colds.

Thuja Occidentalis (Thuj.) is available from our online store as a single remedy in liquids or pills, and as part of the following Complexes (combination remedies): Dandruff: Insomnia from Overactive Mind; Molluscum Contagiosum; Prostate Enlargement; Warts.

Especially suited to the treatment of ailments following suppressed gonorrhoea.

Sweat only on uncovered parts.

Hahnemann recognized three miasms (as he called them) which complicated the treatment of all diseases. They were syphilis, psora and sycosis.

Whatever may be said against his theories along this line, certain it is that these three remedies do correct certain states of the system which seem to obstruct the curative action of other seemingly well-indicated remedies.

Thuja, for instance, cures or so changes the existing conditions that other remedies cure which could not do so before Thuja was given. Many diseases of various forms come under this rule.

Whenever warts, condylomata, fig-warts etc., which come in consequence of gonorrhoeal affections, especially suppressed, gonorrhoea, are found in any case we think of Thuja. For instance, a case of enuresis had resisted many seemingly indicated remedies, until the hands were discovered to be covered with warts, when a few drops of Thuja cured.

Of course, the curative power of Thuja is not confined to sycosis, but can, like other remedies, cure when symptoms indicate it where no sycotic element in the case is apparent. Nevertheless, its chief power is manifested in those cases in which this miasm is unmistakably present. It is astonishing what widely different and varied forms of disease will be so modified by this miasm as to call for anti-sycotic treatment.

Thuja, Agaricus and Lycopodium have been called over-proven remedies; but when we realize the wide range of diseases which are complicated by the sycotic element in them we are not so sure of the over-proving of the Thuja, for it could not so benefit such a wide range of complaints if it could not produce a wide range of symptoms in its pathogenesis. This is also true of Sulphur and Mercury. Thuja has some very peculiar symptoms of the mind which have been verified.

“Fixed ideas, as if a strange person were at his side; as if the soul and body were separated; that the body and particularly the limbs were made of glass, and will readily break; as if a living animal were in the abdomen; tells about being under the influence of a superior power.” Insane women will not be touched or approached.

Aside from these curious mind symptoms we have: “Headaches of sycotic origin, with various symptoms; white dandruff, hair falling out or grows slowly and splits; eyelids bear styes, chalazae, tarsal tumors, or condylomata; ears inflame, discharge pus, or grow polypi. Nose discharges thick, green mucus like Pulsatilla, or scabs are formed in it; warts on the outside of the nose or eruptions on its wings; face has a greasy or shiny look; teeth begin to decay at the roots as soon as they come, the crowns remaining sound. Ranula under the tongue, or varicosities in the mouth or throat; a great deal of croaking, rumbling and grumbling in the abdomen, as if of an animal crying; abdomen puffed and big, protruding here and there as if from the arm of a foetus, or of something alive; constipation of hard black balls; chronic; stools large; and stool recedes after being partially expelled (Sanic., Silic.); or diarrhoea forcibly expelled, copious gurgling like water from a bung hole of a barrel; diarrhoea, especially from the effects of vaccination; anus fissured or surrounded with condylomata (see Antim. crud., Graphites and Silicea); ovarian troubles; asthma; nails brittle, distorted, crumbling, misshapen or soft; warts, condylomata, bleeding fungous growths; naevi; epithelioma, and many other affections in sycotic subjects.”

Finally don’t forget to look for the three miasms in all obstinate cases, whether acute or chronic.