You are here: Home › Know Your Remedies › Know your remedies: Rhus Toxicodendron (Rhus-t.) 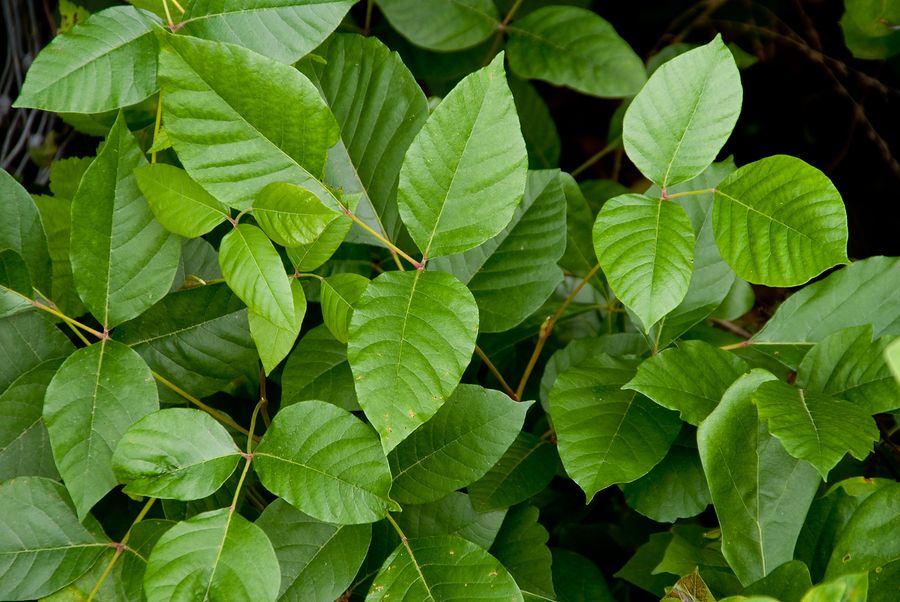 Rhus toxicodendron plants are well-known for producing an itching, irritating, or painful rash on contact. In homeopathic potencies, the Rhus-t remedy treats symptoms related to skin complaints such as blisters, hives with rheumatism, and types of cold sores. Rhus-t is also known as the ‘creaky gate remedy’ as sore and stiff muscles and joints are worse for rest or on first movement, improve with ongoing movement, and then worsen again with over-exertion. Pains are aggravated by cold and wet weather. People needing Rhus-t are mentally and physically restless, and their tongue may have a triangular, red tip.

Dry or coated tongue with a triangular red tip.

Lameness and stiffness on beginning to move after rest; on getting up in the A. M. > by continued motion.

Erysipelas or scarlatina with vesicular eruption and characteristic restlessness.

All diseases that put on the typhoid form with the characteristic, triangular red tip tongue and restlessness.

Modalities: < when quietly sitting or lying and on beginning to move; wet, cold weather; lifting or straining; getting wet when perspiring. > by continued motion, by warmth, dry air or weather; lying on hard floor (backache).

Great sensitiveness to open air; putting the hand from under the bed cover brings on the cough (Bar., Hep.).

Back; pain between the shoulders on swallowing.

Cough during chill; dry, teasing, fatiguing, but urticaria over body during heat.

This is the third remedy of our so-called restless trio. This restlessness of Rhus is on account of the aching pain and soreness which is temporarily relieved by movement. There is also an internal uneasiness which is purely nervous, which causes the patient to want to be on the move, even when there is no particular pain present; but not nearly to the degree that we find it under Aconite and Arsenicum.

As in Bryonia, so in Rhus, the leading characteristic is found in its modality. The aggravation on movement, in the former, is no less marked than the aggravation when quiet of the latter. The patient tosses and turns from side to side with Rhus the same as with Aconite and Arsenicum.

With Rhus the change relieves, while with the other two it does not. In Bryonia, the more the patient moves the more he suffers, while with Rhus, the more and longer he moves the better he feels, until he is exhausted.

In acute affections, like scarlatina and typhoid fevers, and even in the hot stage of intermittent fever, constant movement seems to be the patient’s only relief. With chronic diseases like chronic rheumatism the patient must move, suffers on first beginning to move, but as he continues to move, or as he expresses it, “gets limbered up,” he feels better. But he cannot long lie comfortably in either the acute or chronic trouble, for the aching comes on and he must move even if it does hurt him at first.

If in genuine typhoid Arsenicum, as some think, heads the list, because oftenest indicated, Rhus will put in equally strong claims in all other diseases that take on typhoid symptoms.

The literal meaning of the term or word typhus is smoke, stupefaction. Now in all forms of typhus, known as cerebral, abdominal and pneumo-typhus, taking all together, Rhus will be as often indicated as any other remedy. Whenever in fevers or even inflammatory diseases the sensorium becomes cloudy (smoky) or stupefaction sets in, with low grade of muttering delirium, dry tongue, etc., we think of Rhus.

Dry or dark coated tongue, with triangular red tip, is especial indication for this remedy. This condition of sensorium and tongue may appear in dysentery, peritonitis, pneumonia, scarlatina, rheumatism, diphtheria; bilious, remittent, typhoid fevers, etc. It makes no difference what the name or locality of the disease is if the symptoms are there.

The stupefaction calling for Rhus in these diseases is not so profound as that calling for Hyoscyamus or opium, but is more on a parallel with such remedies as Baptisia, Nux moschata, Lachesis or Phosphoric acid.

Nor is the delirium so violent as that calling for such remedies as Belladonna, Hyoscyamus and Stramonium. Both stupefaction and delirium are mild in form, but regular and persistent.

Of course the Rhus restlessness is present and the patient tosses or turns from side to side, even without knowing of it, or of anything going on around her. She will answer questions and perhaps answer correctly, but afterwards does not know anything that transpired while she was sick, may be for days or weeks.

Rhus, Baptisia and Arnica closely resemble each other; and choice is sometimes difficult; but we will try to differentiate them when we come to write upon the two latter.

Cough during chill in intermittents is a characteristic given us by Carroll Dunham, and is very reliable, as I have had occasion to prove.

Rhus acts particularly on fibrous, muscular and cellular tissues. The muscles are stiff and sore. This may be of a rheumatic character, or may have been induced by straining, by heavy lifting or severe muscular exercise of any kind, or it may have been brought on by exposure to cold, especially wet cold.

This strained condition may not be confined to the muscles alone, but may involve the tendons, ligaments and membranes of the joints. Several affections of the muscles of the back and even the spinal membranes (myelitis) may come on from sprain, or by exposure, by sleeping on damp ground, or in bed with damp sheets, or getting wet in a rain storm, especially while perspiring.

Indeed Rhus is one of our best remedies in lumbago. But it makes no particular difference what muscles are strained or exposed so as to bring on this lameness and soreness the remedy is the same, and if the great characteristic -“Lameness and stiffness and pain on first moving after rest, or on getting up in the morning, relieved by continued motion,” is present, Rhus is the first remedy to think of.

Rhus is also often a remedy for glandular swelling of parotid or submaxillary glands during scarlatina, cellulitis in diphtheria, or orbital cellulitis.

This is also one of our best remedies in skin diseases. No one who has been poisoned by it will doubt that Rhus has power to produce skin disease, and of course in accordance with our law of cure we would expect cures by it. We have not been disappointed.

The eruption of Rhus poisoning is vesicular. Erysipelas of the vesicular variety, accompanied by the restlessness and sensorium of this remedy, is quickly cured by it. So, also, is scarlatina. If we find the skin red, smooth and shiny, with high grade of fever and delirium Rhus would not do any good, but Belladonna or some remedy having that kind of skin, etc.

Apis, Cantharis, Lachesis, Ailanthus and others have each their peculiar appearance of the skin in these acute exanthemata. Yet, notwithstanding this, it must be remembered that in many cases the leading indication for a remedy will not lie in the skin symptoms, but outside of them.

If in variola the eruption turns livid and typhoid symptoms supervene we may rely on Rhus for a good effect. Probably no remedy is oftener found useful in herpes zoster than this.

Rhus is no less valuable in chronic skin troubles than in acute. Eczemas of the vesicular type are often cured by it; there is much itching which is not greatly relieved by scratching. In all such cases of course the constitutional symptoms weigh as much as the local.

So far as dose is concerned, I have used it both high and low, and find it useful all along the scale, but I have an M. M. potency made upon my own potentizer which has served me so well, and so many times, that I cannot refrain from speaking of it.