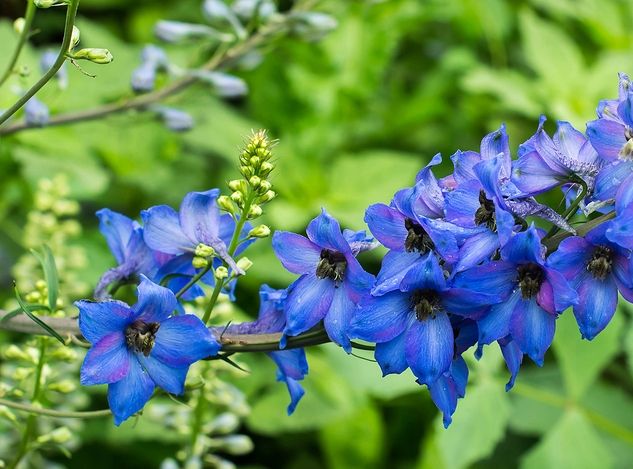 Staphisagria is a remedy for those who are gentle, sweet and selfless yet have suppressed emotions which cause physical or mental-emotional disturbances. They either crave tobacco or are aggravated by tobacco smoke, and discharges (sweat, flatus, stool) may smell like rotten eggs. They dislike being touched and may be sleepy during the day but unable to sleep at night. They also feel worse following afternoon naps. A history of domination, abuse, or rape may be present.

Staphisagria is available from our online store as a single remedy, and as part of the following Complexes (combination remedies): Bites and Stings; Colic; Emotional Shock; Smoke-Stop.

Cross, ugly, scrawny, pot-bellied children; subject to colic; < after food or drink. Extreme hunger even when stomach is full of food.

Styes, nodosities, chalazć, on eyelids, one after another, sometimes ulcerating.

Burning in the urethra when not urinating; very sensitive to slightest mental impressions; least action or harmless word offends.

Sensation as if stomach and abdomen were hanging down, relaxed; craving for tobacco.

“Great indignation about things done by others or himself, grieving about the consequences, continual concern about the future.”

“Throws things away indignantly, or pushes them away on the table.”

“Children are ill humored and cry for things which after getting they petulantly throw away; worse in the morning.”

“Very sensitive to the least impression, the least word that seems wrong hurts her very much.”

“Ailments from indignation and vexation or reserved displeasure; sleeplessness.”

I quote all these symptoms in order to impress the reader with the value of Staphisagria as a mind remedy. Chamomilla is often used when Staphisagria would be better, especially for children, and Nux vomica is sometimes used for adults the same way.

Phosphoric acid is sometimes used for the results of onanism when Staphisagria would do better. You will also notice that this remedy may be indicated for the effects of anger instead of Chamomilla or Colocynth. Here are Chamomilla, Nux vomica Cina, Colocynth and Staphisagria standing very close to each other for cross, ugly, irritable subjects, and there are few cases that one or the other will not fit. Then we have Phosphoric acid, Natrum muriaticum, Anacardium, Aurum and Staphisagria for the apathetic or hypochondriacal.

Staphisagria has a sensation as if the stomach were hanging down relaxed. Ipecac and Tabacum, have the same sensation.

Sometimes it is described as a sinking sensation. It also has the same sensation in the abdomen; feels as though it would drop, wants to support it with the hands. Colic, which might be styled “habitual colic,” in scrawny, ugly, pot-bellied children, and especially if they suffer much with their teeth, which turn black, with tender, spongy gums, which are sensitive and painful.

Now when we add dysentery to the foregoing, we see that Staphisagria acts along the whole intestinal tract. Staphisagria is one of the remedies which has a marked characteristic aggravation after the least food or drink. This remedy has a very peculiar symptom, which appeared in the provings, and which I have verified, viz., “burning in the urethra when not urinating.” While urinating the burning ceased. We have plenty of remedies for burning before, during and after urination, but Staphisagria is the only one having this burning all the time between the acts of urinating. In addition to being one of the best remedies for onanism, it is one of the best for affections of the prostrate gland in old men, with frequent urination and dribbling of urine afterwards. A very common and troublesome symptom found in connection with troubles of the genital organs, both male and female, is backache, which is very peculiar, in that it is always worse at night in bed and in the morning before rising. It is a very efficacious remedy here. Staphisagria is a good skin remedy. It cures both dry and moist eruptions. The eczema of Staphisagria oozes an acrid moisture from under the scabs, and new vesicles form from the contact of the exudation. They generally itch very severely, and one peculiarity is, that when the itching is relieved by scratching in one place it immediately appears in another. The eczema is often on the head, on the sides around the ears, but the most marked action is in the eyelids. Herring’s card expresses it thus: “Styes, nodosities, chalazć on eyelids, one after another, sometimes ulcerating.” There is only one remedy that can compare with this one in chronic blepharitis, and that is Graphites (see also Borax). It has some remarkable cures of cross, puny, sickly children, having the teeth and eyelid symptoms. Not only were the local troubles remedied, but the patient was cured every way.

I think of but two other uses of Staphisagria, which I wish to mention. First, its use in the cure of condylomata, figwarts, or cauliflower-like excrescences. In one case, with the 200th of this remedy, I removed an excrescence on the perinćum of a lady in which the growth was an inch long and the appearance was exactly in appearance like cauliflower. It rapidly disappeared under the action of this remedy and never returned. Second, its use for Incised wounds. It is the best remedy here, where there is a clean cut as after surgical operations. It is to such wounds what Calendula is to lacerations, Arnica, Hamamelis, Ledum and Sulph. acid for bruises, Rhus tox., Calcarea ostrearum and Nux vomica for strains; Calcarea phosphorica and Symphytum for fractures.