Felician looks very young for his age.  His parents belong to two different tribes; his mother is Maasai, his father is Chaga.

He’s had tuberculosis three times over five years. The last time (2003) he was tested for HIV and found positive.

His CD4 count when down to 46 and he began ARVs (Antiretroviral medications) and Septrin. The CD4 count went to 167 by 2007 but is now going down again (138), which is indicative of treatment failure. 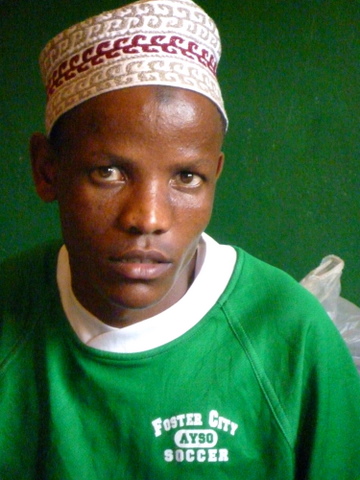 He doesn’t have a cough or tuberculosis now but occasionally has malaria.

His tongue has black patches on it. The glands in his neck are swollen; the right side worse.

He has numbness in his whole lower limbs; a side effect of ARV medication.

He perspires at night. He dreams of being pursued by animals, like a leopard, and of burials; he sometimes dreams he is dead and being buried.

He is sweet and soft spoken, like a Maasai.

He is fearful of snakes and dogs.

He is short-tempered and gets angry but he avoids confrontation and moves away from it for some time.

His childhood was difficult because his mother and father separated; his father remarried and he was brought up by his stepmother for 20 years.

This was very difficult because she could not divide her love. He felt there was no love and no care, just jealousy and segregation.

Repertorization (Radar) [Editor’s Note: Repertorisation is the process of identifying key symptoms and the remedies relating to those symptoms. Radar is the name of the repertorial program used by Jeremy for this particular case.]

Dreams – dead of the

Remedy: Magnesium carbonicum 12c daily
The reasons for the prescription are fairly clear: ailments from being an orphan, quarrelsome and peaceful, glands, night perspiration, etc.

He has a new symptom of a discharge from his eyes after sleeping.

The swollen glands in his neck are better; numbness in his legs is much improved.

The night perspiration is the same. He has dreams of being chased by dogs and fighting unknown beings.

His anger is much reduced.

2 months later: doing well, feels great and energetic.  He is sleeping well.  All of his symptoms are gone and he feels good.

He has no more dreams of being pursued or of burials, no numbness in his legs, no eye discharge and no anger.

18 months after first remedy: none of the original symptoms remain; NO cough, no night sweats, no gland problems, he is strong and working.

Sleep is good, no bad dreams.

CD4 count is 417. The doctors say he is doing so well they stopped his Septrin.; their suggestion, not mine!

One old symptom is much reduced: numbness on the soles of the feet.

One new symptom: itching in ears. 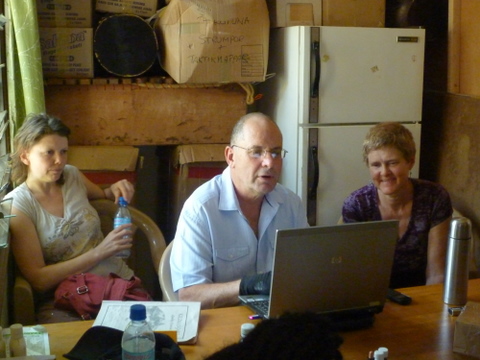 Esther was diagnosed with AIDS in 2006, but probably had it for 18 years already; we know this since her 18 year old child was infected at birth.

She is an upright, aware, proud, and regal person.

Before ARVs, she had frequent fevers, diarrhea, and blistery, watery skin eruptions. These symptoms improved with ARVs but have started coming back now.

She has no appetite and is losing weight. She used to be 68kg, she is now 56kg.

She feels very weak; her legs are weak and tired. It is difficult for her to work.

Her lips are peeling. Her sleep is poor; she worries about her kids. She has no money to feed them or send them to school. She cannot work because she is too weak. The children are often hungry.

She has pain in her joints, especially her knees and elbows. Her vision is poor. She has headaches in her temples and vertex. Occasionally, she gets the flu.

There are fungal problems in her mouth, ulcers on her lips, and her tongue has a black base with a white coating. Her chest feels tight with a cough and she suffers from pains in her chest and sternum.

She has a painful stomach ulcer. She frequently gets malaria attacks. She is chilly and has back pain in the lumbar region.

She dreams of being in a mortuary washing dead bodies; of a new baby that she delivers alone; of being chased by a lion and a leopard; of being married but it fails.

Her husband ran away in 2006, after he found out that she was infected; she is angry and sad about this.

Her kids are disturbing her. They are infected but she can’t tell them.

If she could, she would like to be a lion; then she would get back at her husband. She likes lions because they are strong and fast; if she was like that no one could hurt her.

She is angry at her brother who took away their properties. Now, the house is falling down and no one takes care of it. She would like to kill her brother.

She feels that the ARVs helped her symptoms in the beginning but now she is going downhill and there is nothing more they can do.

Repertorisation (RADAR and Repertory of Mental Qualities) [Editor’s Note: Repertorisation is the process of identifying key symptoms and the remedies relating to those symptoms. Radar is the name of the repertorial program used by Jeremy for this particular case.]

While the case is an easy ‘signature style’ one, it is interesting to see how well it repertorises. The Lac-leo sense of betrayal is prominent.

Six months later: the remedy helped. Her energy improved and she is feeling stronger.

Her sleep is much better and she has no more bad dreams. Her appetite is good and she has gained weight.

Note: the CD4 often goes down initially, after a first prescription. This is because the test measures quantity and not quality. The CD4 cells are fewer but healthier.

She then had malaria and was given malaria medicine at the hospital. It made her feel bad and she doesn’t want to take it anymore.

Five months later: The remedy helped a lot!! The doctors checked her blood and there is no virus!!! They could not understand how this happened.

She feels she does not have the ‘Sickness’ anymore. Her CD4 is 560.

She has had no malaria attacks. She is not tired anymore, feels very strong and can work better.

The ulcer is gone, her appetite is much better, and she has gained more weight. Her peeling lips, joints, and vision are much better and there is no more mouth fungus.

She had a dream that she was talking to her dead father. He gave her support and advice and said he would help her.

She has swollen glands in her axillae, a fungal 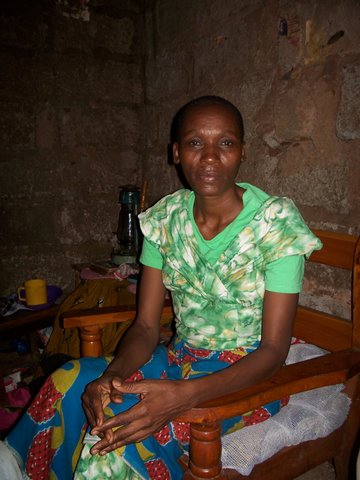 infection of her genitalia, weight loss and is fatigued while walking. She is very tired and she cannot work.

Before ARVs she had itching skin and eruptions with watery discharge all over her body. Since beginning ARVs, she developed numbness in the soles of her feet, as well as the right arm and teeth.

She has a headache with numbness in her right temple, worse from sun and heat.

She has yellow coryza, which looks like pus. Her left eye is weak and she has painful finger joints, which are distorted.

She has frequent diarrhea with rumbling in her stomach and she feels very weak with the diarrhea. She has profuse watery discharge from her vagina.

Periodic fevers are worse in the evening.

Her sleep is poor and she has very upsetting dreams about funerals; a few times she dreamt of knives.

She is generally weak and forgetful.

When she is angry at her family, she can speak out but with others, she keeps it to herself and forgives them after saying prayers.

Her husband is also sick; he had a stroke and can’t remember anything.

She has 8 children, none of whom are infected. However, she can’t afford food for them and the children often don’t eat all day. They don’t go to school because she has no money to pay their fees.

She is very anxious about her children and finances; she worries about how to feed them since she has no energy to work or do anything. She cries.

Repertorization (Radar and J Sherr Mental Qualities Repertory) [Editor’s Note: Repertorisation is the process of identifying key symptoms and the remedies relating to those symptoms. Radar is the name of the repertorial program used by Jeremy for this particular case.]

5 weeks later: after one week, she felt much better.

She had a nosebleed and a headache and then it went away. She felt like vomiting.

She continued with the remedy and felt better, stronger, no more tiredness. The pains in her axillae glands have ameliorated. She gained 2 kg of weight.

The numbness in her feet, legs, and arm is gone. There is still numbness in her teeth but it is improved. The headaches are different now, there is no numbness and she doesn’t get them from the sun.

Her nose discharge is not yellow anymore but white. The discharges  from the eye and the vagina have stopped. The fevers are gone and so are the diarrhea and stomach rumbling.

Her sleep is better with no upsetting dreams. Her memory is better, her energy is improved, and she feels much better in herself.

Remedy: one week break, then Alumina 12c every two days

Two months later: she has been doing very well, but now she has an acute respiratory illness.

All the numbness, headache, pain in fingers and discharges are better. She is still forgetful but much less so.

Her energy has been much better. She can now work so a bit more money is available.

For a week, she has had a fever, cough, and flu; possibly pneumonia. She feels a sticking sensation in the lung and has difficulty breathing.

She is weak, has the chills, and no appetite. Her throat feels like there is an ulcer in it and she coughs because of an itch in her throat. When she coughs, her chest hurts. She has cutting pain in the lower ribs.

The chills and fever are worse in the evening. She just wants to lie down and she feels better in the sun.

Next day: much better; acute illness over quickly and safely.

Four months later: she was well for three months until she had malaria and took allopathic medication, after which she was worse again.

One of her children died from Malaria, two months ago, but she says she has dealt with it. This is sadly a frequent occurrence in Africa.

Six months later: she is well all round, no bothersome symptoms. Her CD4 is now 700, which is a remarkable improvement.

Reprinted with permission of:

Homeopathy for Health in Africa

Part 1: Homeopathy and AIDS – A Letter from Africa

Homeopathy in Africa – A Day in the Clinic

Video: Rayms B Raps About Homeopathy in Africa

All work at Homeopathy for Health in Africa (HHA) is done on a voluntary basis. HHA operates on relatively small amounts of money donated by the homoeopathic community, patients, well-wishers, and even personal savings.

HHA desperately needs funding to maintain and expand this project, to open more clinics and centres, to offer homoeopathic treatment for those who seek it, and to develop nutrition, farming and educational programmes.

Why not help them with a donation? It’s a simple way to make a big difference to the lives of others. Donate here.

Part 1: Homeopathy and AIDS – A Letter from Africa

Homeopathy in Africa – A Day in the Clinic

Video: Rayms B Rap About Homeopathy in Africa

A Letter from AIDS Clinics in Africa