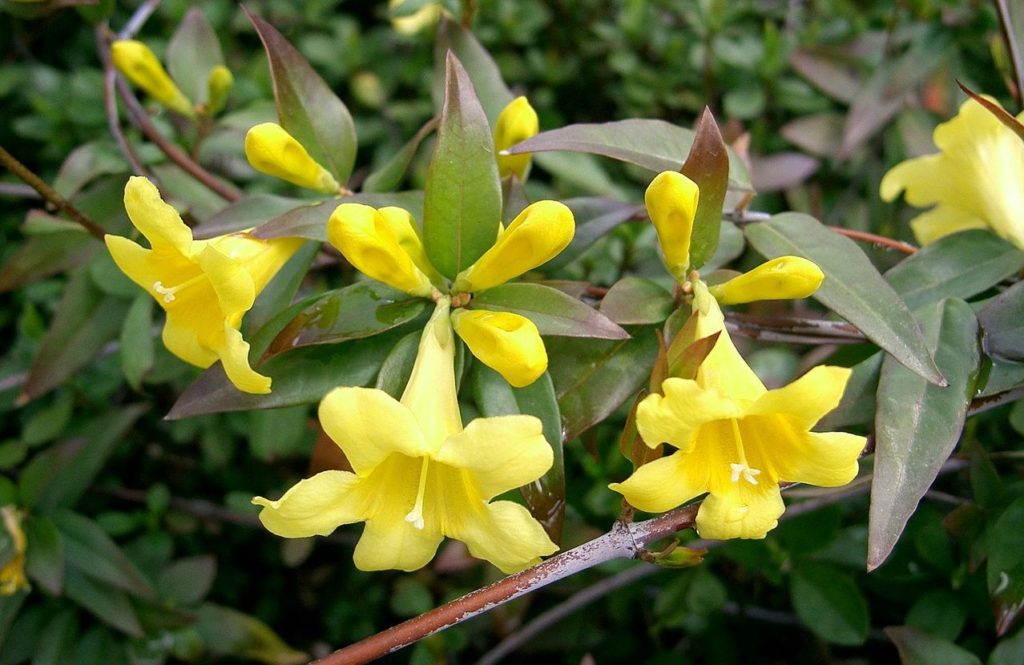 Gelsemium (Gels.) is available from our online store as a single remedy and is also included in the following Complexes (combination remedies): Fatigue – Physical; Insomnia from Anxiety or Grief; Jet-lag; Winter Defence.

Complete relaxation and prostration of the whole muscular system, with almost or entire motor paralysis. Eyelids droop; muscles refuse to obey the will.

Trembling of hands or lower extremities if he attempts to move; must lie still.

Nervous chill, violent shaking with no sense of coldness.

Desire to be quiet; feels too weak to move.

Children: fear of falling, seize the nurse, grasp the crib, especially in intermittents.

Great heaviness of the eyelids; cannot keep them open.

Fears that unless constantly on the move, the heart will cease beating.

This remedy affects, primarily, the whole nervous system. the most prominent symptom, as we are in the habit of recording the effects of remedies, is “complete relaxation and prostration of the whole muscular system, with almost or quite entire motor paralysis.” This muscular prostration seems to come through inability of the nerves to convey impressions; thus we have the symptom “muscles will not obey the will.”

This condition comes on gradually, the first symptom being a feeling of lassitude or general fatigue. He wants to lie down he feels so weak (Picric acid), and is inclined to drowsiness; the pulse becomes weak and slow, but is accelerated on the least motion. Then, if he attempts to walk, the legs tremble, or the hands tremble if he attempts to lift them, the tongue trembles if he attempts to protrude it; all this from weakness, both objective and subjective.

If I were to put one adjective before this remedy to indicate its chief characteristic I would call it the trembling remedy. Sometimes this trembling is so severe as to actually shake the patient like a chill, but there is no chill, objective or subjective.

This weakness may increase to the stage of complete paralysis, and such symptoms as these appear: The eyelids droop (Sepia, Caust.) until they are completely closed. The fingers become unmanageable, so that he can no longer guide them over the keys of the piano in playing; he cannot guide his feet where he wants to in trying to walk, notwithstanding the sensorium remains clear, with perhaps the exception of a little drowsiness. He knows perfectly well what he wants to do, it cannot do it.

Then again, there may be neuralgia in various parts, and the pains may be a dull aching all over (myalgia), or they may be sudden and darting, so acute as to cause sudden starting.

Or, again, it may cause spasms or convulsions; but with all these there is the characteristic prostration, for instance, in prosopalgia the eyelids droop from weakness. So we repeat Gelsemium is pre-eminently a nerve remedy.

Having shown the central action of this great remedy as it manifests itself upon the nervous system, we will proceed to notice some of its local uses which will always be more or less associated with such action.

Upon the mind it shows its depressing power, and is portrayed in such symptoms as these: The Gelsemium subject is torpid, sleepy and dreads movement. The mental faculties are dull, cannot think clearly or fix his attention: “desires to be quiet; does not wish to speak or have any one near her for company, even if the person be silent.”

I consider the large doses of either remedy used by some to quiet excited conditions, or to control spasms or convulsions by their toxic, depressing, or paralyzing action on the muscular system, antipathyc and in no way truly curative.

There is an excessively sensitive condition of the nerves that is very peculiar, and that this remedy controls markedly, viz., susceptibility to mental disturbance, such as sudden excitement or emotion, bad news or fright, the anticipation of an unusual ordeal.

One of the effects following these things is a diarrhœa. Many people are thus affected. Gelsemium not only cures the diarrhœa for the time being, but often cures the whole abnormal condition. I have never known the remedy to do much good in these conditions below the 30th potency, but often in the potencies much above that.

As would be naturally supposed from its general action upon the nervous system, this remedy exerts a decided influence upon the sensorium and brain. Dizziness, with blurred vision, pupils dilated, double sight and sense of intoxication, show this influence.

One very characteristic symptom appears here which is found under only one other remedy with any prominence, viz., “child starts and grasps the nurse and screams, as if afraid of falling.” If there is any difference between it and Borax, it is that in Borax the child manifests this fear only when it is being laid down in the cradle, or from downward motion.

The most characteristic headache of Gelsemium is a dull, tired headache at the base of the brain. The patient wants to lie with head raised upon a high pillow, and lie perfectly still. It is aggravated by mental labor, smoking tobacco, lying with the head low, and in the heat of the sun. (Glonoine, Lachesis, Lyssin, Natrum carb.). It is temporarily ameliorated by pressure and stimulants. Such headaches often follow a debauch.

Sometimes we have a headache from passive congestion; then the pain begins in the occiput and spreads all over the head. The aggravations are about the same as in the other variety, or nervous headache.

Gelsemium has also a sick headache that is preceded by blindness. As the head begins to ache the blindness disappears. The sick headache of this remedy is not accompanied with much nausea and vomiting, as is that of Sanguinaria, Iris versicolor and Lac defloratum, but is accompanied by the characteristic weakness and trembling belonging to this remedy.

Gelsemium is one of the so-called fever remedies. It is useful in the remittent fever of children. The fever is never of that active or violent form calling for Aconite or Belladonna, but of a milder form. The child lies drowsy, does not want to move, or, if it does, cannot move much on account of the weakness.

One author says that Gelsemium stands midway between Aconite and Veratrum viride. I should rather place it between Baptisia and Belladonna.

Like Baptisia, there is prostration, but the typhoid tongue and other symptoms are not so strong. There may be dark red face with both and a sort of besotted expression; but with Baptisia the sensorium comes more fully under the influence of the drug, so that the patient will fall asleep even when trying to answer questions. Then the offensive sweat, stool and urine of Baptisia are not found under Gelsemium.

Like Belladonna, there is congestion to the brain and dilated pupils, but it is not so intense, accompanied by active or violent delirium as with Belladonna.

Gelsemium is not a very great intermittent fever remedy; but is one of the best for nervous chill (Gelsemium chills run up and down the back in wave-like succession from sacrum to occiput; chill begins between scapulæ, Capsic., Sepia; chill begins in lumbar region, Eupat. purp. and Nat. m.; chill begins in dorsal region, Eupat. perf., Lach.); when there is great shaking and chattering of the teeth, with no objective, or even sense of coldness.

Patient wants to be held because he shakes so.” This kind of chill is frequently found in hysterical, and heart diseases (organic).

The pulse of Gelsemium is slow when quiet, but greatly accelerated on motion. For the weak, slow pulse of old age there is no remedy oftener useful.

For the nervous prostration already described, just preceding typhoid, there is nothing like Gelsemium. I have aborted many cases of typhoid fever with this remedy -at least I think so.