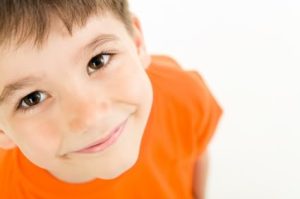 Darcy was diagnosed with autism when he was 2 years old. His mum started his homeopathic treatment at 4 years of age, just five months prior to this account. Darcy’s two siblings were also treated homeopathically through this period for attention deficit hyperactivity disorder (ADHD). Darcy continues his treatment today with ongoing improvements beyond those mentioned in this report.

Darcy has been progressing markedly since starting the homeopathy.  In the beginning he was very, very emotional, would cry a lot, run to his room to hide and was obsessional. His speech was at a very short sentence level but very difficult to understand. He almost appeared to stop after words and be trying to work out what to say but couldn’t get his brain to work. He didn’t like cuddling or touch – only on his terms.

Shortly after starting the remedy his all-day crying ceased.  He gradually lost that all-consuming Thomas the Tank obsession. I would now say he is not obsessed with anything – he definitely has some particular interests but not an all-consuming and limiting obsession. He initiates cuddles with me often now in the last few weeks holds my hand when sitting or lying together. And he appears to do it for enjoyment, not the rigid, almost forced acting he did previously.

He now tolerates (to a degree) children near him, though is yet to play with others at the playground.  Speech is fantastic. Huge sentences, some articulation issues and on a bad day very hard to understand but nevertheless a huge step forward. I would have to say on a good day if you didn’t know what you were looking for you wouldn’t know he was autistic, just a lovely little boy that you might think a little quirky.

As a whole the homeopathy has allowed my children’s anxiety levels to reduce significantly, allowing them to focus on other things such as their schooling and developing healthy interests and hobbies. It has also allowed us for the first time to go out more socially. Although we are still limited in this area to only things they tolerate, I can see they are gradually increasing their tolerance levels of crowds, etc, and can see this will only increase in the future.

But the biggest thing of all is we now have smiles and laughter and hugs and hand holding where previously we were a big storm of anxiety and stress on the autism spectrum. For that I will be for ever truly grateful to homeopathy.

Do Visit: Saving a Lost Generation to watch Carol Boyce’s  trailer for her in-production film on how homeopathy brings real hope to autism afflicted children.

visit the up coming internet page