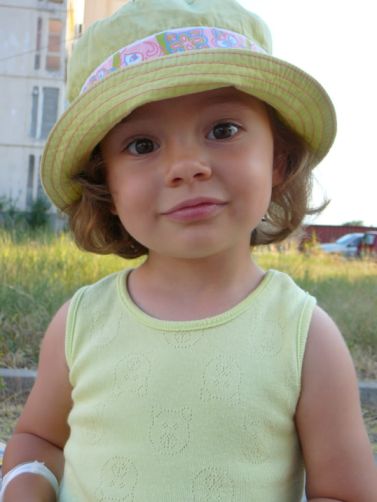 We first noticed our daughter was having some problems around her 2nd birthday, when she stopped talking and was having difficulty making eye contact and being socially interactive.  In fact she wasn’t even acknowledging my husband’s presence when he came home from work at the end of the day.  Melissa was very quickly becoming lost in her own world.

She found it difficult to cuddle and smile and we noticed that she was beginning to “stim”, by obsessively picking flowers, stones and walking around on her tippy toes.  Melissa was also becoming increasingly agitated and would have extremely bad tantrums that we found difficult to assist with.

I began to do some research and heard about the work of homeopathy as a possible solution for our daughter.  I made an appointment to talk to a homeopath at a treatment clinic we had heard about.  My husband and I had a long conversation with her on the phone (we live interstate) and discussed Melissa’s behaviours, preferences, sleeping patterns etc.  Our homeopath decided that Melissa’s symptoms indicated a particular remedy and we began Melissa on a very low dose of it.

The first time I gave Melissa her remedy I remember being quite nervous.  I gave it to her and within about 15 minutes Melissa was at her worst – very agitated, stimming, tantrums and unhappy.  I just thought “oh no – what have I done!”, however within the hour Melissa almost transformed before my eyes.  She looked at me right in the eyes and locked eye contact with me – this was a very memorable moment and it seemed like some sort of fog had lifted and Mel was more present than she had been for some time.  Mel also seemed more calm and peaceful.

I let our homeopath know about the results and we decided to give a remedy every 3-4 days based on her behaviours.  We kept this up and could see a real change in her, however a few weeks on when some of the old behaviours flared up we moved onto a higher potency of the remedy. With this potency we had even more positive changes.  Melissa began to talk.  Melissa went from zero words to almost 50 in one day!  She rapidly progressed and began to call me Mumma (which was absolute music to my ears).  She would now notice when my husband would walk in the door from work and started to run down the hall to greet him.  We noticed that Melissa was becoming increasingly happy and more interactive and her stimming was reduced.

We decided to try a different remedy to see if we could get any more improvement. It totally didn’t agree with Melissa and she began to show some of the old behaviours almost immediately (tippy toes, stimming etc).  After consulting with our homeopath we took her off it and after a short break began the first remedy again – and again saw her make more improvements.  This was a great test for us as we started to think that maybe she might have been getting better regardless of homeopathy – this just showed us that it was definitely the catalyst.

Melissa has remained on the same remedy to this day, on a weekly basis, and she is doing very well.  We still have work to do but she is a completely different child to the one our homeopath initially worked with.  Melissa no longer tippy toes or stims, she has very short lived tantrums (typical to her age), she speaks in sentences of up to 6 words (she is 2 1/2 years old) and she is fun loving, interactive and has a great imagination.  Melissa has also shown that she can now read and is beginning to make friends at playgroup.

Melissa now plays hide and seek with me “Hide Mumma”, she cuddles and really shows and enjoys receiving affection.  She loves to hold my hand on outings, shows me things by dragging me by the hand and has started to point.

We had no other intervention in the first few months of homeopathy other than some basic speech therapy, lots and lots of prayer and adding some supplements to Melissa’s diet (including a gluten free/casein free diet).  We did do some cranio sacral work with Melissa through our chiropractor as well.  We are so happy with the homeopathy and truly believe that it has been an integral part of her healing process and will continue to be in the future.

Melissa’s pediactrician has recently said that Melissa no longer qualifies as being autistic.

Melissa has now been having homeopathic treatment for 5 months and continues to improve. As you have read, some of Melissa’s existing symptoms intensified for a short period after the first dose of her remedy in what is known as a homeopathic aggravation. An aggravation (sometimes called a healing crisis) occasionally occurs when beginning a new remedy. This phenomenon is not harmful, normally short lived and if the correct remedy has been chosen, followed by significant improvement. And this is exactly what happened for Melissa.

Melissa has done exceptionally well with homeopathic treatment and while her rapid response to the indicated remedy is not unusual, it is important to be aware that some children progress a little more slowly – but progress they do. Homeopathy has shown itself again and again to be one of the best treatment options for autism spectrum disorders, learning difficulties and behavioural problems. It is extremely gratifying to be able to improve the health of children affected by these problems – it’s one of the the best parts of my work.

Do Visit: Saving a Lost Generation to watch Carol Boyce’s  trailer for her in-production film on how homeopathy brings real hope to autism afflicted children.