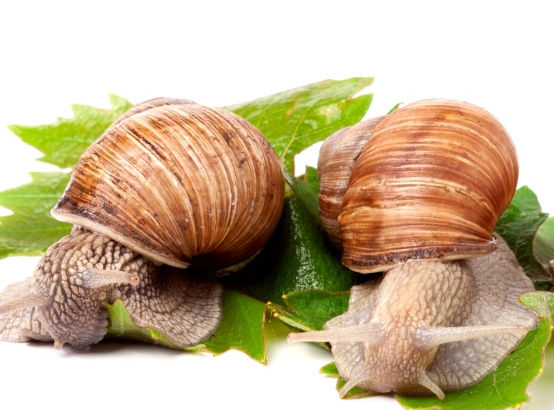 Homeopaths have discovered that a simple homeopathic remedy safely protects plants and crops from hungry snails and slugs.

Farmers and home-gardeners who use it report that just one treatment deters snails and slugs for up to 4 months and that its effectiveness is maintained even through heavy rain.

While some farmers spray the remedy directly onto the plant, others have had equally good results by watering it into the soil above the roots. The remedy seems to improve the plant’s resistance, making them unattractive to these pests that then move elsewhere.

Helix tosta is inexpensive, easy to use, and a safe form of pest control. It’s harmless to people and wildlife and because it is non-toxic, doesn’t burn if spilt on the skin or poison if swallowed by a child or pet. It is so safe that plants treated with Helix tosta can be eaten immediately after use.

This is great news for those concerned about the use of chemicals in agriculture but fed up with freshly planted seedlings being nibbled to the ground by snails.

What is Helix Tosta?

Helix tosta is the Latin name for a homeopathic remedy made from toasted snail shell. Homeopaths have used Helix tosta for more than a century for certain respiratory problems and tuberculosis, especially if the person was coughing up blood.

The remedy has been used as a snail and slug repellent only in more recent times.

(Keen to try your hand at homeopathy? Instructions for making this remedy are included a further down in this article)

Does it Really Work?

When we first received our Helix tosta remedy we too wanted to see if it worked.

Not a single snail or slug could be found around Fran’ss garden (must be those kookaburras) so it fell to Michelle, another Homoeopathy Plus practitioner, to trial it on her snail infested rhubarb.

This is what happened:

“When I was first asked to do this I thought, what a crazy idea!  But I dropped a pill into a bottle of water and sprayed my rhubarb where the snails normally thrive, and waited to see what would happen.

The next morning there was not a snail to be seen … until I turned the leaves over. They had all clustered on the undersides. I sprayed the leaves again but this time, on both sides.

Since then it truly has been a case of, ‘not a snail to be seen’. I have checked the rhubarb day and night and it remains completely snail free. Some have parked themselves on the wall beside my garden but none have ventured onto the plants.

I am seriously impressed. I’ve been told that this effect will last a few months, even if it rains, but I guess that is something I will have to wait and see.

Next time I am going to try watering the roots instead of spraying the leaves.” 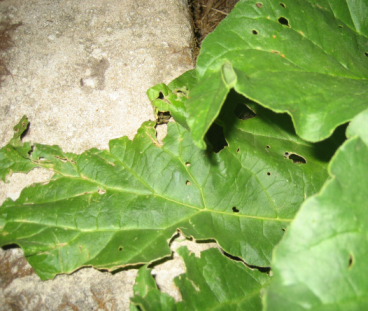 (You can see the snail-eaten leaves of the rhubarb in this photograph sent to us by Michelle.)

Some time later in a followup report, Michelle said that after more than three months of snail-free rhubarb, snails once again started to eat her plants and leave their droppings all over the leaves.

This time, instead of spraying Helix tosta onto the leaves as was done the first time, she watered it into the roots so she could compare results between the different applications. Within a day or so her plants were snail free once more.

After Michelle’s experience with Helix tosta we were keen to know what took place when others used the remedy. We sent a survey to everyone who purchased a vial during November and December 2009. They were asked three questions.

Of those who had used the remedy, 83.8% rated it as either good or excellent for repelling slugs and snails. We have placed the preliminary reports of their success and the final results of the survey in the Agrohomeopathy section of the website.

How Does it Work?

Certainly not by chemicals.

When correctly chosen, homeopathic remedies stimulate an energetic response from either humans, animals, or plants that improves their resistance to pathogens and disease. This is exactly what happens when Helix tosta is used for deterring snails and slugs.

Just like us, plants in less than perfect health are attacked by parasites and disease. When a plant is strengthened by the needed homeopathic remedy (ie. Helix tosta in this instance) it is less attractive to slugs and snails –  they either die out or move to greener pastures.

Make Your Own Snail Repellent Remedy

The following instructions will have you producing 100,000 litres of snail and slug repellent from just one small snail shell.

Amazing! Never let it be said that homoeopathy is expensive or lacks efficiency.

Homeopathy can be used with all living things. While many people know it treats human health problems, and some know that it treats animals, only a few know that it works just as well with plants for their pests or diseases.

Useful though this knowledge is, agrohomeopathy (homeopathy for plants) is much more than just getting rid of snails and slugs. It is used around the world to treat all manner of plant diseases, repel pests, improve soil productivity and increase crop yield – and all in an environmentally safe and supportive manner.

Because this topic is so important for the way we grow our food and other crops, and the safe preservation of our soils and the animal life that shares this planet with us, regular articles agrohomeopathy will be placed in the Agrohomeopathy section of the website.

For those new to subject, we have added an interview with Vaikunthanath Das Kaviraj, one of the foremost practitioners and educators from the agrohomeopathy movement.

Kaviraj first discovered homeopathy in 1979 when he was seriously ill with dysentery in India. He says, “…after 11 weeks of it and nearly dying, homeopathy fixed me in less than 3 days”.

He then began his homeopathic studies but his work with plants didn’t begin until in Switzerland in 1986 when his friend suggested he try treating some apple trees that had developed a virulent bright red rust.

To everyone’s surprise, homeopathic Belladonna cleared the rust and left a much better-tasting apple than the trees had produced prior to then.

This experience inspired years of research in countries as far afield as Australia, Europe, and Asia. Read what Kaviraj has discovered about the effects of homeopathy with plants in The Kaviraj Interview.

Homeopathy in the Garden