You are here: Home › Know Your Remedies › Pulsatilla Pratensis (Puls.) 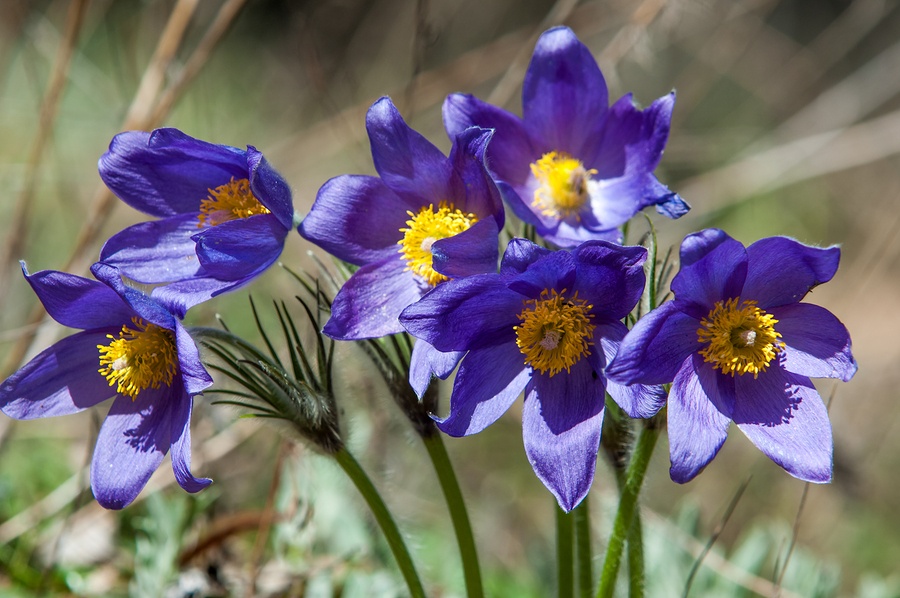 Those needing Pulsatilla Pratensis (nigricans) tend to be timid, sensitive, gentle and yielding. Physical and emotional symptoms are changeable. Though sympathetic to others, they also weep easily and crave attention, sympathy, or consolation for themselves. If not received they become irritable and jealous or feel completely unloved and alone. Joint or rheumatic pains “wander” about the body and discharges are thick, bland, and yellow/green. Symptoms are worse in warm or stuffy rooms, and better in open air.

Changeable remedy, pains travel from one joint to another; haemorrhages flow and stop and flow again, no two stools alike, no two chills alike, no head nor tail to the case-mixed.

Bad taste in the mouth, < mornings, with great dryness, but no thirst.

Catamenia too late, scanty or suppressed, particularly by wetting the feet.

Modalities: < in warm room, warm applications, abuse of Iron; chilliness with the pains, > by cool open air, walking slowly around, cold food or drink, tying up tightly > the headache.

Pains accompanied with constant chilliness, and the more severe the pain the harder the chill (with profuse sweating, Cham.; with fainting, Hepar sulph.; with frequent micturition, Thuja; with delirium, Verat. alb.).

Now to call attention to another of Hering’s characteristics, and I know of no one who has expressed them better, we have -“Mild, gentle and yielding disposition; cries et everything; is sad and desponding; weeps about everything; can hardly give her symptoms on account of weeping.”) And again: “Sandy hair, blue eyes, pale face, inclined to silent grief with submissiveness.” (Silicea is its chronic).

Here we have a description of the Pulsatilla temperament as near as words can express it, and it is a fact that when you find it in a patient, no matter what the pathological condition, Pulsatilla will almost surely help. There are few exceptions. So we learn not to put too much stress on pathological states to the neglect of symptomatological conditions.

Pulsatilla is a remedy of wide range of action. Farrington mentioned its use in seventy-three different affections, and has not by any means exhausted them all; and if you study Pulsatilla in Hughes’ Pharmacodynamics you will notice that, although he recommends it in many diseases, he does not, and evidently is not able to, talk as much from a pathological standpoint especially from the provings of the drug as he does of many other remedies.

There is another condition of Pulsatilla which may be considered Characteristic, and which Hering does not mention in his cards, viz., changeableness of symptoms (Ignat., Nux mosch.). All that Hering said was “wandering pains shift rapidly from one part to another, also with swelling and redness of the joints.“

Now if this occurs in rheumatism (Manganum acet., Lac caninum, Kali bichrom., Kalmia lat.), and especially if in the Pulsatilla temperament we may perform a miracle of curing with this remedy. But this shifting or changeableness is not confined to the pains, which may be either rheumatic or neuralgic, but is found in the disposition.

The patient is now irritable, then tearful again, or mild and pleasant; but, even with the irritableness, is easily made to cry. The haemorrhages flow, and stop, and flow again; continually changing. The stools in diarrhoea Constantly change in color; they are green, yellow, white, watery or slimy; as Guernsey expresses it -“no two stools alike.” (Sanicula). This is often found in the so-called cholera-infantum or entero-colitis of children in hot weather.

We sometimes have patients come into the office, and find, in trying to take their case, no “head to tail” to it. It is mixed. The suffering and pain is now here, now there. The symptoms are contradictory, as we term them. This condition should always call attention to Pulsatilla and it will often clear up and cure the case. Ignatia also has these ever-changing, hysterical and contradictory symptoms, both pre-eminently woman remedies.

Pulsatilla like Nux vomica is a great remedy for disorders. of digestion. Symptoms -“Bad taste in the mouth, especially early in the morning, or nothing tastes good, or no taste at all.” (Bryonia, bad taste with coated tongue and thirst; Pulsat., no thirst).

“Great dryness of the mouth in the morning, without thirst. Stomach disordered from cakes, pastry, rich food; particularly fat pork.” (I would say -fat meats generally). These are reliable symptoms, as given in Hering’s cards, and are not very much like the symptoms of Nux vomica, which is not disturbed by fats, but on the contrary likes them and they agree. With Nux vomica warm food agrees best; with Pulsatilla, cold things.

The bad taste in the mouth is persistent and the loss of taste is frequent, as is also the loss of smell.

How peculiar that Pulsatilla should have dry mouth and no thirst, while Mercurius should have characteristically moist mouth with intense thirst. There is no accounting for taste, as the man said when he saw a fellow kiss his mother-in-law.

The merest tyro in prescribing could hardly mistake the symptoms of Pulsatilla for those of Nux vomica and yet I have found physicians prescribing these remedies in alternation, at intervals of two or three hours.

Having called attention to the action of Pulsatilla on the digestive organs, which are lined with mucous membranes, we now wish to notice that it has a peculiar action on mucous surfaces generally. This peculiarity consists in the character of the discharges from them. They are thick, bland and yellowish green. These are found in nasal catarrh; leucorrhoea; expectoration; gonorrhoea; in ulcers; from the ears and eyes; in short, from every mucous outlet of the body.

The expectoration of pulsatilla, which is thick, green and bland, tastes bitter, while that of Stannum is sweet and that of Kali hydroiodicum and Sepia salty.

One of Schuessler’s tissue remedies (Kali sulphuricum) greatly resembles Pulsatilla in the character of its discharges, and not only that, but also in its wandering pains, evening aggravations and ameliorations in cool, open air. Kali hydroiodicum is also ameliorated in open air and worse in a warm room.

Now that we are on the subject of greenish discharges, especially the expectoration, we will mention also Carbo veg. Lycopodium, Paris, Phosphorus and Sulphur. Of course, the other symptoms must decide the choice between several remedies having one symptom in common.

A certain physician in Albany, N. Y., was called in consultation on a so-called case of phthisis pulmonalis. The case was in allopathic hands. After carefully examining the case, he was asked: “What is your diagnosis, doctor?” “Stannum,” said the doctor. “What!” “Stannum,” replied the doctor. Stannum was the diagnosis of the remedy, not the disease. It was given and cured the patient.

Now we come to the curative action of Pulsatilla in affections of the female genital organs. The fact that it has such a decided action upon these, added to the womanish disposition of this remedy, is additional reason why it is called the woman’s remedy, as we said when writing upon the disposition and temperament. “Catamenia too late and scanty, or suppressed, particularly by getting feet wet,” and “Painful menstruation with great restlessness, tossing in every possible direction,” and we have already mentioned the changeable characteristics in the flow of the menses, viz., they stop, and flow, stop and flow again, etc. So, also, the menorrhagia.

In these menstrual troubles of Pulsatilla the wetting or chilling of the feet is of prime importance and, acting upon it, you may save your patient from consumption as a result of such exposure and suppression.

Now don’t pour down mother tincture of Pulsatilla by the ten-drop doses, as is the manner of those who do not believe in potentized remedies. You may give Pulsatilla in the high, higher, and highest potencies, and confidently expect the best results. I have often seen the delayed menses of young girls of Pulsatilla temperament appear promptly and naturally under the M. M. of Swan and C. M. of Fincke (also with Kali carbonicum, Tuberculinum, and others). so also have I seen them restored after suppression, by the same.

Now if you should try one of these very high potencies in a case of menstrual difficulty, and it should not succeed, don’t jump to the conclusion that I have been mistaken, for Pulsatilla is not the only remedy for such cases. Homoeopathy is too often blamed when the blame lies in the stupidity and malpractice of the prescriber. Magnesia phos. will relieve more cases of painful menstruation than Pulsatilla, and that is not a cure-all, either. Study up your case.

But after all, the prime characteristic of this wonderful remedy lies in its modality. “Better in cold air and from cold applications.” The patient is not only better generally in the open, cool air and worse in a warm, closed room, but local affections also, as, for instance, the vertigo; pain in head, eyes, ears; itching of eyelids; roaring; coryza; pain in face; toothache; colic; labor pains; sciatica; ulcers, are all better in open air. These affections that are > in cold air are also especially > while walking or moving slowly about (Ferrum) in open or cool air.

Remember that Pulsatilla as well as Rhus toxicodendron is ameliorated by motion, but Pulsatilla in cold or cool open air, while Rhus tox. wants motion in warm dry air.

Other remedies have aggravations from heat; but Pulsatilla leads them all. The relief from cold and cool, open air is as positive as that of warmth or heat is for Arsenicum.

Now to close our remarks on Pulsatilla we will give a few choice symptoms without any particular comments upon them.

In any of these local affections we should expect to find the mind and modality of this remedy present or not be very confident of a brilliant cure.

I Sniff At Homeopathy – Olfaction Dosing